1 year to go until the PyeongChang 2018 Paralympic Winter Games

To mark this significant milestone, Paralympics New Zealand (PNZ) is delighted to announce the appointment of Ashley Light as Chef de Mission of the New Zealand PyeongChang 2018 Paralympic Winter Games Team. Light was Chef de Mission for the Sochi 2014 Paralympic Winter Games, which saw a New Zealand team of three Paralympians return home triumphant, including a silver medal from sit skier, Corey Peters. Light has contributed to a total of five Paralympic Games campaigns in a variety of roles, one of which was supporting the gold medal winning Wheel Blacks team at the Athens 2004 Paralympic Games. Light is the High Performance Director at Snow Sports New Zealand.

It seems but an instant since New Zealand’s exceptional success at the Rio 2016 Paralympic Games captured the imagination of the nation. In September 2016, a team of 31 Paralympians brought home 21 medals, with Para swimmer Sophie Pascoe becoming New Zealand’s most decorated Paralympian. Break-out stars including sprinter Liam Malone and long jumper Anna Grimaldi joining veteran performers such as Para swimmers Cameron Leslie and Mary Fisher in bringing home gold medals. This team took New Zealand to 13th on the overall medals table and re-secured New Zealand’s title of number one in the world medals per capita, previously won at London 2012.

Light wants to maintain the momentum built up to, during and after Rio for New Zealand as the Para athletes now build towards PyeongChang 2018 in South Korea.

Ashley Light said, “It is an absolute honour to be named as the Chef de Mission for the PyeongChang 2018 Paralympic Winter Games. The outstanding results of the New Zealand Rio 2016 Paralympic Games Team highlighted the importance of creating a high performance environment for the team during the Games to deliver outstanding results. We will focus on creating a support framework where the Para athlete’s needs will drive all Games team decision making. I look forward to continuing the momentum built with the PyeongChang 2018 Paralympians and support staff.”

Fiona Allan (Chief Executive, PNZ) said, “New Zealand Para sport has witnessed staggering success and growth in recent years. Last year New Zealanders showed unbelievable levels of support towards our Rio 2016 Paralympians. We are targeting two medals in PyeongChang 2018 and will work with Snow Sports NZ to ensure that the Para athletes have the support required to achieve this.”

Currently on the ground in PyeongChang, Ashley Light is supporting Vancouver 2010 gold medallist Adam Hall, Sochi 2014 silver medallist, Corey Peters and Sochi 2014 debutant Carl Murphy. The Paralympians are in the midst of an exceptional Northern season, with Hall collecting a bronze medal at the 2017 World Para Alpine Skiing Championships and two IPCAS race titles and Peters two silver medals at the 2017 World Para Alpine Skiing Championships, three World Cup medals, one title at IPCAS races since December 2016. Hall, a three-time Paralympian stunned New Zealanders during the Vancouver 2010 Paralympic Winter Games with his courage and determination when he fell during his second run only to get back up and go on to win a gold medal. Para snowboarder Carl Murphy will join Hall and Peters on the South Korean slopes this week, fresh from his recent stint in Colorado, Murphy is a fierce competitor who made his Paralympic debut in Sochi 2014, finishing 4th. He has high hopes for PyeongChang 2018 and is currently working hard to regain his world number one status following surgery last year.

Corey Peters (Sochi 2014 Paralympic silver medallist and PyeongChang 2018 hopeful) said, “Today is an exciting landmark for all winter Paralympians as we continue on our journey to PyeongChang 2018. I am really looking forward to the next 12 months and preparing to be the best that I can be.” He continues, describing his maiden Paralympic experience in which he won a silver medal, “To be in the top three in the world on that day in Sochi and to be able to share it with so many people was a dream realised. My aims in PyeongChang 2018 are to race to the very best of my ability, motivate and inspire New Zealanders to stick with their passion and win more medals to bring home to New Zealand!”

The PyeongChang 2018 Paralympic Winter Games will take place from the 9 - 18 March 2018. The Games will feature 670 athletes from 50 countries competing in 6 sports, with 80 medal events taking place. To donate or support our New Zealand Paralympians, please visit www.paralympics.org.nz. 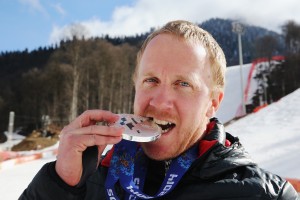