Defending champion Zoi Sadowski-Synnott put down the highest scoring run in the qualifying rounds of the Burton US Open Snowboarding Championships Slopestyle in Vail, Colorado on Thursday morning NZT time.

Six of the 14 riders in the women's field made the cut to Saturday's Finals.

The slopestyle semi-finals competition went down today at the 38th annual Burton U·S·Open Snowboarding Championships with the field of 16 women competing on perfectly sculpted features in an updated slopestyle course design. Zoi Sadowski Synnott  earned the top score in the two-run semi-finals leading the field of six women and advancing to Friday’s slopestyle finals for a shot at the coveted Burton U·S·Open title and a piece of the $373,000 overall prize purse.

The women kicked off the first day of pro competition with a stacked field battling it out in ideal sunshine conditions. Defending Burton U·S·Open Champion Zoi Sadowski Synnott earned the top score of 75.15 on her first run. She linked up a switch boardslide into a 50-50 frontside 360 out on the upper urban features, into a backside 540 stalefish and a switch backside 540 stalefish on the two transition features. She followed with a 50-50 wildcat on the high-speed rails, and finished with a huge frontside 720 mute grab on the final kicker. Sadowski Synnottsaid, “I really like the course, I’m really down with how the quarterpipes are set up on the course so you have to hit them on a specific side, it really shows who the best all-around rider is.” Sadowski Synnott plans to step up her run in  finals, she said, “I have a lot more in the bag for Friday.” Hinting at some added rotations on the quarterpipe features.

Anna Gasser (AUT) took second with a score of 71.35 throwing down a massive switch frontside 900 double cork Indy grab on the final kicker. Hailey Langland (USA) clinched the third spot in her final run with a score of 69.55. 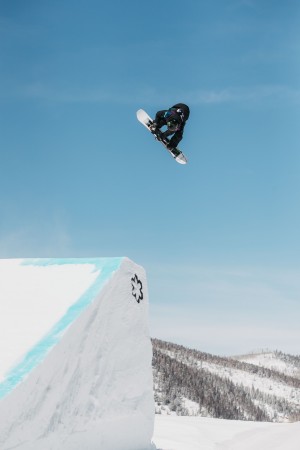