In the best-two-from-three-run heats Finn started off with a high score of 89.25 for his switch triple 1260 but went too big with his second trick, a 1440 safety to lead stale, crashed, and finished in 15th place. Ben Barclay had the opposite problem, going too small in a field of heavy-hitters and earning a relatively low score for his double 1440 tail grab. Jackson Wells’ switch double misty 1260 and double 900 combo couldn’t match the top scorers and he finished in 13th behind Ben Barclay in 12th.

The Air + Style is one of the world’s premier snowboard competitions running for over 25 years. This season marks just the second time that freeski has been included in the Air + Style programme, after the first such instance took place in Los Angeles in 2015.

The permanent big air ramp at Shougang Park will be the venue for the Beijing 2022 Olympic Winter Games in just over two years’ time. 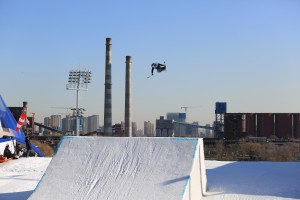