Zoi Sadowski-Synnott has finished in sixth place at the Burton US Open. Pushing hard for a podium finish, Zoi showed solid form but couldn't get a clean landing on her 1080 on the final kicker.

The defending champ sent difficult tech tricks down the course such as switch boardslide 270 and 50-50 to 360 melon out on the rails, backside 540 stalefish and switch backside 540 stalefish over the shark fins, and 50-50 to backflip the cannon box but ultimately, could not reign in her final trick, a technical 1080 double cork mute, and had to settle for sixth place in the competitive final.

Jamie Anderson (USA) earned her eighth Burton U·S·Open title. The reimagined slopestyle competition venue provided a challenge and an opportunity for riders to push their own progression and that of the sport of snowboarding—a trademark of the Burton U·S·Open. The best of three runs format combined with absolutely perfect sunny and calm conditions and a huge cheering crowd led to one of the most exciting adrenaline-filled finals in recent memory.

Jamie Anderson went into finals following four consecutive slopestyle wins including Aspen X Games, Mammoth Grand Prix, Winter Dew Tour, and now the 2020 Burton U·S·Open. The leaderboard remained fixed after the first round when Anderson earned the top score of the day with an 84.50 in a run that was undoubtably one of the most progressive women’s runs in history.

Jamie said, “Coming into finals, I wanted to drop a hammer and do my best. My game plan was to just send it. I didn’t think it would work, but I was in my flow state, everything connected, and I just felt good.” Her winning run, which she had not landed previously in practice, started off with a backside lipslide followed by a tailslide 270 out on the upper urban features, into a backside 540 Indy grab and a switch backside 540 Indy grab on the two transition features. She followed with a frontside boardslide 450 out on the high-speed rails and finished with a switch frontside double cork 900 mute grab sent deep on the final kicker.

Anna Gasser (AUT) earned second place and a score of 81.00 in a run that included a massive double crippler over the transition feature—the first time that trick has ever been landed in a women’s slopestyle run—and a switch frontside 900 double cork mute grab off the final kicker.  Miyabi Onitsuka (JPN) took third place for the second consecutive year with a score of 76.65 landing back-to-back 720s on the two transition features.

Yuto Totsuka (JPN) earned the winning score of 97.00 on his all-in second run. Totsuka came out spinning, drifting and absolutely defying gravity on his edge-of-the-seat landings in a run that featured a McTwist into an alley oop rodeo 540 stalefish grab in the modified minipipe, blasting into a frontside 1440 double cork Indy grab, a switch frontside 1260 double cork mute grab and finishing with a massive switch backside 1080 double cork mute grab on the final hit bringing the crowd to their feet. Totsuka’s win follows on his 2019 rookie third-place finish. 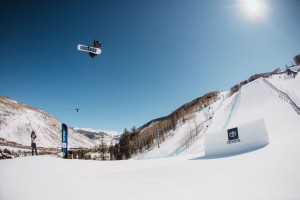