The NZ athletes travelled to Perisher, Australia to compete in the first competitions in the ANC series, with the overall goal to secure a place on the FIS World Cup tour for the 2019/20 season. The overall winner of the ANC series will earn a World Cup start and the title is decided by one result in Big Air and two results in Slopestyle.

Day one’s competition followed the standard World Cup format of the best score from two jumps counting for qualifying. Four NZ athletes made the cut for finals with Fraser McClellan and Luca Harrington also in the top 12.

In the finals it was the combined score of a competitor’s best two of three jumps, using two different take offs, which decided the rankings. Jackson Wells earned the top score with a switch dub misty 12 safety grab and dub misty 10 truck driver grab. Ben came in second with a dub 14 tail grab and switch dub 12 safety to Japan grab.

Fraser landed his switch dub 9 safety but a crash on his dub 12 safety put him back in eleventh and meant that he missed day two’s competition. Luca finished in ninth place.

Strong wind and heavy snow added to the challenge of day two’s competition and meant that finals had to be cancelled and results taken from the qualifying phase.

Ben claimed the win with his dub 14 tail grab, Jackson landing a switch dub misty 12 safety for second place and Luca Harrington just off the podium in fourth place.

Ben said that he was “pleasantly surprised” to win “but very, very happy.”

Jackson commented that it was “good to get back into competing after almost a year off and to be on the podium despite challenging conditions.”

The Slopestyle event scheduled for 9 August was cancelled due to the weather conditions.

The next Slopestyle competitions in the ANC series will take place back in NZ, at Cardrona Alpine Resort on 14 – 15 August. An ANC Halfpipe will be held 26 - 27 August and the final Slopestyle event 30 August - 1 September at Cardrona as part of the Winter Games NZ. 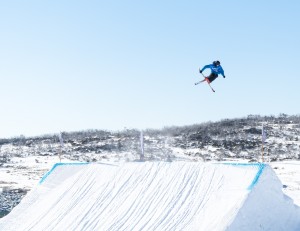