Queenstown, New Zealand (12 August 2019) – Day two of the New Zealand Alpine National Championships at Coronet Peak brought clear skies and calm conditions for the Men’s Giant Slalom. A strong international field of 84 racers battled it out on the course set on The Hurdle run with Willis Feasey emerging as the NZ National Champion.

Starting from bib 23 Willis Feasey put down a strong first run to move in to fifth position overall, 0.79s behind leader Daniele Sorio (ITA), and fastest of the NZ racers.

“It went pretty well at the top,” Willis explains. “It’s a challenging course, quite steep, I think I handled that quite well and carried some good speed in to the flat and moved up a few spots from my bib number which is what you always want.”

Run two got underway after a course reset with the top 30 racers starting in reverse order. Willis Feasey was able to maintain the top place amongst the NZ men despite dropping back to eighth place overall. He explains:

“On the second run I skied the top alright but wasn’t carrying as much speed and then got little squashed with the forces through a compression turn and that cost me a little speed but, overall, I’m pretty happy with how I skied.”

Willis, who was last crowned national GS champion in 2017 said, “It’s a good feeling to have the title back again this year.” 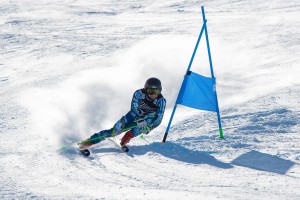