Top 10 for Alice Robinson at GS World Cup in Courchevel

Seventh after run one, 0.49s behind the leader, a few mistakes cost her on run two and Alice dropped three places to finish 0.98s behind winner Federica Brignone of Italy.

“It was a tough, tight race,” explains Alice. “I was fast in the first run until a small mistake cost me a bit of time. I really wanted to ski my best in the second run and charge, and I felt like I did that. Unfortunately, it wasn’t the fast run that I thought, and I was a bit too aggressive for the snow surface and it slowed me down," she explains, referring to the spring-like conditions on the course.

“The girls’ GS is very stacked at the moment so you have to be attacking and executing to be in there. But a top 10 is a solid result and I’m looking forward to the rest of the season.”

World number one Mikaela Shiffrin was well off the pace in today’s race. First racer out of the gate she was placed 19th after run one, 1.33s off the pace and finished 17th overall.

NZ’s Piera Hudson did not qualify for her second run, finishing outside the top 30 in 54th. 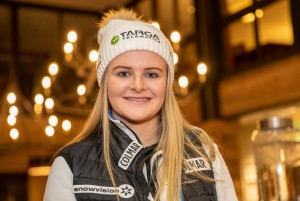