Checking the mailbox for interesting deliveries was a great boredom buster during our lockdown days, and, sure, we were excited to receive our online orders, but opening the mail and finding a  medal with your name on it, well, that’s an even better story…

The medal – and the story – belong to Snow Sports NZ snowboard team member Tiarn Collins, in recognition of his second-place finish in the FIS Men’s Snowboard Slopestyle World Cup Tour standings for the 2020 season.  It’s an impressive result by anyone’s standards but even more so considering the road Tiarn has taken to get there. The story starts just over two years ago at the PyeongChang 2018 Olympic Winter Games.

The then 18-year-old snowboarder was on a tear, hitting his stride in the lead into the Games with a World Cup silver medal in Big Air and a bronze in Slopestyle. With the trick bag fully loaded, Tiarn was ready to take on the world’s best, on track to make the Olympic finals and a threat for the podium.

It should have been game on… instead, it was game over. A fall in practice ahead of the qualifying rounds in PyeongChang and a major shoulder injury meant Tiarn would miss out on competing at the 2018 Olympic Winter Games.

“Not really what I was aiming for,” says Tiarn, now, two years later, underplaying the huge disappointment he felt at the time. “Things were going really well earlier that season and I felt pretty confident going into the event. I just wanted to keep everything going.”

Back in New Zealand following an operation to stabilise the shoulder, Tiarn began what would become a long road to recovery in March 2018. Putting the disappointment on missing out on the Olympics behind him, he worked hard on rehab and just a few months later was “stoked to be back in the mix” and kicking off the northern hemisphere season by qualifying second in his heat and finishing eighth in the finals of the Snowboard Big Air World Cup in Modena, Italy.

On to Beijing for the next stop on the World Cup Tour and Tiarn was again looking for a top result, qualifying to finals in fifth place. However, crashes on two of his three finals runs meant he would finish 11th overall. Worse news was that the shoulder had taken another big hit and, just like that, another season was over. This time rehab would take a full year.

“I wasn’t aiming for that either!” says Tiarn. “I was devastated I had to miss another season and go through surgery and rehab all again. It felt like I was going in circles.”

Fast forward to December 2019, following a second surgery and successful rehab and Tiarn was back in Beijing, ready to throw down in competition. The venue, somewhat fittingly, the Beijing 2022 Olympic Big Air ramp.

“It was good to be back,” he remembers. Not only back on track, but with full focus on the next Olympic campaign. “It was cool to see the venue and the insane structure they built for the jump. They put a lot of effort into it and it rides well so it (Beijing 2022) should be a good show.”

The 2020 Slopestyle World Cup Tour began in January 2020 with Tiarn this time making a more gradual rise up the ranks, finishing 19th in Laax, Switzerland, improving to 12th in Seiseralm, Italy, and saving the best for last in Calgary, Canada in February.

Signalling that he was on his way back to peak performance level with a fourth-place finish in the qualifying, Tiarn went on to take the win, outscoring some of the world’s best riders including X Games Aspen gold and silver medallists Darcy Sharpe (CAN) and Mons Roisland (NOR).

His first World Cup victory and only this third Slopestyle competition since injuring his shoulder in PyeongChang, it was enough to put Tiarn into second place on the tour rankings behind Japan’s Ruki Tobita.

And then Covid-19 took hold, bringing a premature end to another season. With the final competition of the tour cancelled Tiarn headed home to Arrowtown, to lockdown with his family.  Thankful at least to be fit and healthy, he switched his snowboard for the skateboard and kept busy skating the ramp in his backyard.

The successful, albeit sudden, conclusion to his competition season might have seemed a little surreal had it not been for the arrival of that medal in the mail this week.

“I actually didn’t know they did anything for second place, so I’m hyped to get a medal, and it looks cool too!” he says.

“I’m stoked to have finished second, there was meant to be another competition later in the season but that got cancelled due to Covid. I’m still happy anyway because it was my friend Ruki Tobita who got first overall, so it was cool to have a mate of mine up there too.” 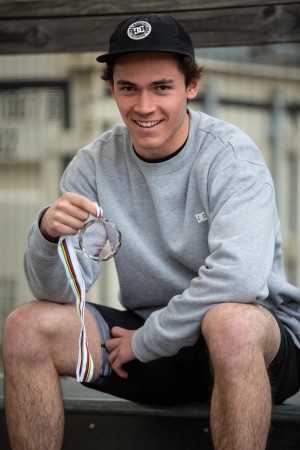