Kiwi cross-country skier and Wanaka local Campbell Wright had a gutsy race starting in 17th place and making it up to 7th in an impressive show of strength and determination for the 17-year-old.

Jessie Diggins (USA) topped the women’s field for the second day running, taking away her second gold medal of the series. The PyeongChang gold medallist was “pretty wrecked” at the end of the 5km women’s race, on a tricky course that left many athletes visibly exhausted at the finish line.

“The 5k’s are super, super hard, because you’ve really got to give it your all for about 14 minutes… This is honestly one of the most challenging 5k courses I’ve ever raced, which is really impressive.”

Team Japan had outstanding day in the 10km men’s race, sweeping the podium for a second time with Tomoki Sato winning gold, Hiroyuki Miyazawa in 2nd place and Masato Tanaka in 3rd.  Sato said he enjoyed the race, and that the Japanese team will fight for a similar result in the final race of the series. 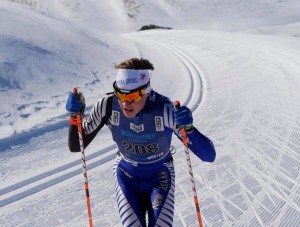