Opening day at the 2019 Snow Sports NZ Junior Freestyle Nationals saw competitors in Under-8 through Under-18 age categories enjoying the K2 Skier Cross and Smith Snowboard Freeride at Cardrona Alpine Resort. Running for a decade, the Junior Nationals is a fun competition to close out the season and has long been an important stepping stone for athletes on the competitive pathway.

With snow coverage somewhat lean on the freeride course in Tulips, head judge Dion Newport reminded competitors “this isn’t the year to try and get a wildcard to the Freeride World Tour, make sure you’re safe”. Riders were judged on their line choice, technique and flow through the course and given a score out of 100 points based on overall impression.

“It was a bit sketchy at the top, so my plan was to keep it slow and steady but be really fluid,” explains Eliana Collins (Queenstown), winner of the U14 women’s snowboard freeride.

Riders in the U18 category put their years of competition experience to good use, showing good confident riding through the course.   Cool Wakushima (Queenstown) earned her top score with her strong linked turns, two big airs and fast riding out at the bottom. U18 men’s winner Tim Maas (Australia) also put down a fast run, incorporating a big air with indy grab.

Swiss Junior Freeride Champion Eliot Daenzer impressed the judges with a technical line and the biggest rock drop of the day but couldn’t quite hold on to his landing and finished outside the U18 men’s medals.

Meanwhile, over on the gravity cross course the skiers were also battling hard for their podium places. With a good mixture of alpine ski racers and freeskiers making up the start list, racing was tight and a fast start out of the gate and a good line choice were key to the win. Each racer took an individual timed run through the course before racing head to head in heats of four.

Here again, it was the U14 men’s final that saw the closest finish, with Finley Melville-Ives (Wanaka) coming in to the final corner a ski length behind Ethan Mclean (Owhango), finding an inside line and attempting a mid-air pass off the last hip before boosting himself across the line for the win.

“I didn’t have a very good start, when I came out of the start gate I was in fourth so I really hooned,” explained Fin.  “I was pretty stoked, it’s my first time on the podium for ski cross at Junior Nationals.”

Ruby credited her performance to a season spent focusing on developing ski technique.

“My coach is an ex-ski racing coach so he’s helped me out with good ski technique as well as park and pipe,” explained Ruby.

National Freeski Coach Kerr McWilliam adds: “It’s been a big focus for the national development athletes, starting with them overseas in America and during the domestic winter. Good skiing creates good freeskiers and so it will continue to be a focus as they move along the pathway.”

The chance to compete in a wide range of disciplines is one of the drawcards bringing competitors from throughout New Zealand to compete at the Junior Nationals.

“It’s fun getting out there with everyone and just sending it,” says Ruby. 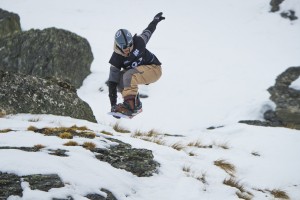