Smyth victorious at Whistler Cup by an impressive margin of 3.29 seconds

Mikayla Smyth followed up her silver in Slalom with victory in GS crushing the field by over 3.29 seconds. Alec Jackson took silver in GS and 7th in Slalom. The Team Pro Slalom Event was another strong finish for the NZ Team with the girls placing 3rd and the boys placed 4th in the U14 team event.

In U16 Super G the team’s strongest performance were from Olivia Flight in 12th and Sam Hadley in 16th. In U16 GS, James Stanfield finished 17th and Olivia Flight 24th. The Slalom proved a challenge for the NZ team with no finishes for the men and a 22nd place for Olivia Flight.

Other highlights from the U14’s came from Ruby Fullerton 17th and Thomas Picton-Warlow 18th in GS.

The Whistler Cup is the only FIS-sanctioned event of its kind in North America, enabling U16s to see how they stack up against the best in the world in their age group. With the ability to compete on a world stage, these athletes get a glimpse into the depth that exists, further preparing them as they develop into FIS-level athletes. New Zealand’s previous Whistler Cup winners include Alice Robinson (2015). 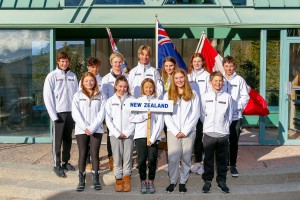