Athletes were greeted to blue skies and wide views over the Wakatipu Basin for the start of the Alpine Ski Racing technical events with the FIS ANC Giant Slalom presented by Coronet Peak.

The day heralded a stacked start list for both the men and women with many World Cup athletes in attendance as they head into the final leg of their Southern Hemisphere training blocks.

Set on the same course as the Super G events held earlier in the week, 36 women and 86 men made the most of the morning's firm snow conditions on The Hurdle to set up a thrilling showdown between some of the world’s best technical ski racers on the first of two days of Giant Slalom racing which contribute to the overall standings for the Australia New Zealand (ANC) Cup.

The women’s race was a triumphant conclusion to a two year injury lay off for University of Denver senior, Storm Klomhaus as her form pushed Robinson into second and winner of the Winter Games NZ Night Parallel Slalom Maryna Gasiencia-Daniel (Poland) into third.

"I’m not known for finishing courses. In my last season of racing before injuring my knee (two years ago) I didn’t make a finish in 32 races so I’m just so happy to be out here and skiing again. You don’t know what you’re missing until it’s gone,” said Klomhaus.

The bright sun brought a mix of snow conditions to the 1060m long course proving a challenge for racers to adapt to in the second run.

“It was a fun course today. The snow was a little softer and ran a little slower this afternoon than this morning”, said Alice Robinson of the rapidly changing snow.

The depth of the men’s field was apparent with many starters boasting low FIS (international ranking points) contributing to a day of close racing with the top sixteen being within one second of each other. Sam Maes (Belgium) backed up his top seeding position for the event winning by 0.32 seconds over Magnus Walsh of Austria.

A member of Team Global Racing, “It’s just great having my team mate Magnus (Walsh) in second. It’s always good to grab a win and perfect confidence knowing that you’re skiing fast and can win a race in a very strong field”, stated an elated Maes.

Adam Zampa (Slovakia) rounded out the men’s podium taking third a mere four one hundredths of a second back from Walsh.

Full results from the Alpine Ski Racing Giant Slalom events can be found at https://vola-publish.com/snowsportsnz/ 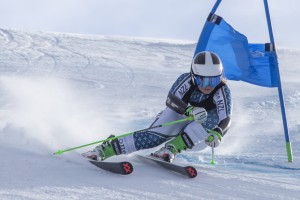