So, it’s still too soon to get back to skiing or snowboarding but for anyone living close enough to a beach, surfing is now an option. More than just a welcome distraction from lockdown life, it’s a chance for snow sports athletes to get some valuable cross training in. Not so sure about the link between surf and snow? Let us explain. We’ll start with the ‘snurfer’…

Invented in the USA by Sherman Poppen in the 1960s, the snurfer was the predecessor of the snowboard. A cross between a mono ski and a surfboard, the snurfer had no bindings and was ridden like a snowboard.

Fast forward another half century, board design (surf and snow) is a lot more sophisticated, snowboarding is a well-established sport, snowboarders have become professional athletes and there is still a strong crossover between surf and snow.

So how exactly can snow sports athletes benefit from time in the water?

Surfing requires high levels of lower body strength and explosive power just as skiing and snowboarding do, so can assist with some cross training of these physical qualities, explains HPSNZ Strength and Conditioning coach, Shane Crowhen.

Working on dynamic balance on a moving platform is beneficial, particularly for snowboarders.  Surfing also requires good levels of mobility which is important for freeskiers and snowboarders who must manoeuvre their bodies into different positions or shapes in order to perform their tricks and grabs. Having the freedom to explore movement and be creative in the water can lead to learnings or ideas for on-snow creativity.

It is also about building confidence in an athlete’s physical capability. Shane explains: “Confidence is key for park and pipe athletes. Having the belief in your ability to solve a movement problem in a high consequence situation is very important; it allows the athlete to remain calm which provides a greater chance of a successful outcome.”

The obvious thing that surfing and snow sports have in common is that they’re fun. After a busy competition season, surfing is the perfect way to keep the stoke alive when athletes need a break from the snow or - like now - can’t get there. It usually involves sunshine and warmth which winter folk do like to get a dose of every now and again.

This type of active relaxation is good for the snow sports soul, a happy place to recover from the demands of competition which in turn provides a good state for training.

Snow Sports NZ have included surf sessions for elite athletes at international trick progression summer camps during breaks between on-snow training blocks and also for planned recovery after competition.  Sessions on home surf and lessons at development camps have proved popular as well as beneficial, and there’s often a SSNZ athlete or staff member tearing it up on the Hawea River Wave! 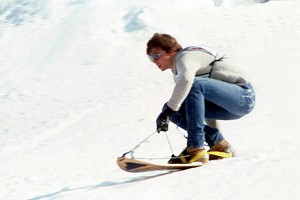