The judges had their work cut out for them all day long with competitors pushing their limits to earn their spot on the podium. The Men’s Snowboard podium was decided on the very last run of the day when top qualifier Yiwei Zhang (CHN) called third time lucky and managed to land the run he’d been gunning for all day. His combo of front 900, back 900, front double 1080, cab double 1080 earned him a score of 91.00 and top step on the podium.

“That’s why it’s good to have three runs,” explained Yiwei after his final run.

Ziyang Wang CHN led the field for most of the day, staking his claim in the top three with a first run score of 84.00 but in the end would have to settle for second place.

NZ’s Rakai Tait tentatively held on to a third place spot until Yiwei’s final run pushed him off the podium in to fourth. The home crowd felt the weight of his disappointed when he stomped two technical runs in a row but failed to land the last trick on both his second and third runs.

Fletcher Craig (NZ) was also just outside the top placings, finishing his day in fifth place. 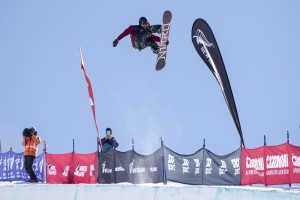