Russia’s Aleksei Bugaev held the lead from the first run, and stormed home for a convincing victory in men’s standing in run two. Thomas Walsh (USA) finished in second place.

“It’s good to be back in the start and to get the first race of the season underway,” says Adam. “It was a pretty strong field with top Russian, American and Japanese athletes which gives us a good benchmark early on in the season.”

In the men’s sitting event Takeshi Suzuki claimed victory as the fastest racer on both runs, but second and third places saw a tight battle. Kurt Oatway (CAN) managed to leapfrog from fifth place equal with NZ’s Corey Peter on run one to finish second overall after a blistering second run. Corey Peters picked up the pace to record the third fastest time on course on run two, jumping him up to fourth place on final standings. Ravi Drugan (USA) finished third overall.

Corey, who specialises in the speed events rather than the technical Slalom, says he is pleased with today’s result.

“Having taken two years out from competing in Slalom it’s certainly a good start to the season and I’m hoping that it continues throughout the rest of the season.”

He says that a change of equipment has helped boost his on-snow performance.

“During the season I switched to a French model sitski, a Tessier Scarver. I feel it’s made a huge improvement in the Giant Slalom and Slalom events. Today that was evident with a fourth-place finish against some solid international skiers.”

Racing continues at Mammoth Mountain until Sunday (local time, Monday NZ) with another Slalom race scheduled for tomorrow followed by Super-G and Giant Slalom later in the week. The schedule has been subject to change due to current weather and snow conditions; updates will follow.

“I’m looking forward to progressing to tomorrow’s Slalom to see what we can do,” says Adam. “The snow is really aggressive here in Mammoth so this is the biggest thing to adapt to moving forward throughout the week.” 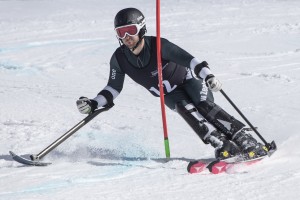