Cardrona, New Zealand (31 August 2019) – It was the Snowboarders’ turn to take on the Big Bucks terrain park in the qualifying rounds of the FIS Australia New Zealand Cup Slopestyle presented by Cardrona Alpine Resort today. The big field of 50 male and 16 female competitors had their work cut out for them with strong winds gusting through the course in the morning but, nevertheless, pushed hard to make the cut for the top-eight women, top-10 men finals.

In the women’s field, three-time X Games Snowboard Slopestyle gold medallist and World Cup ranked number two, Silje Norendal (NOR) set herself apart with her second run.  Her score of 89.33 gave her a comfortable nine-point lead on 15-year-old Dutch rider Melissa Peperkamp who topped the first run scores on 80.00 points.

The men’s field was split between two heats with the top four from each heat plus the next best two scores from either heat progressing to the finals.

Australian frother Matty Cox took a “You’ve got to just go for it” attitude to the windy conditions and nailed his first run for a score of 90.33 and the lead.

“I’m absolutely over the moon,” said Matty after the first run. “I’ve been stressing about one trick all day, it’s been the second rail, the inwards switch back two, I was struggling a little bit in practice but I got it that run, it came together so nicely, I’m so hyped. Second run I’m going to have a crack at upping my score again.”

True to his word, Matty stomped his second run, lifting his score to 95.33 and qualifying to finals in first place.

Up and coming rider Canadian Mateo Massitti was the fourth-place qualifier from heat one.

In men’s heat two it was 17-year-old NZ rider Mitchell Davern (Auckland) in the top qualifying spot with an impressive 95.00 points. Sitting in fifth place on 81.00 points with a solid first run in the bag, Mitch knew he would have to increase his trick difficulty on his second run in order to guarantee his finals spot. It would mean stepping up from a 720 to a double 1080 on jump one and landing that run for the first time in competition.

“I was honestly really scared about stepping it up but I knew I had to do it to qualify,” explained Mitch after the competition. “I’m pretty stoked I landed it. I honestly didn’t expect to. I was really hyped when I did.”

Japan’s Hiroaki Kunitake landed a 93.00 with his first run which would put him through to finals in second place, Isak Ulstein (NOR) third and Ryoma Kimata (JPN) in fourth. Japanese riders Taiga Hasegawa and Shuzzaburo Otsuba, also competing in heat two, were the next top riders and qualified to finals ninth and tenth overall. 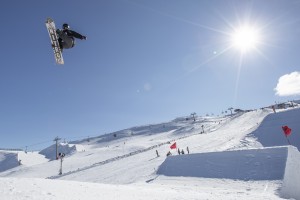