Dropping in for his run with a front flip off the top ridge, Hank booted across the mountainside and had spectators holding their breath as he took a huge transfer air, put it to his feet and backed up with a stomped 360.

“I was probably more stoked to make it over that transfer gap than I was to see my score!” said Hank. “It’s always hard to know definitively if those kind of gaps will actually line up from a visual inspection but it looked like it would work to me and I’m glad it did.”

In Freeride World Tour events riders are not able to ski through the course before the competition and can only plan their line by making a visual inspection from the bottom or using images of the venue.

Sidelined by illness, Hank took a year off from competition in 2019 and said being able to compete again this year was the most important thing.

“I felt an almost overwhelming sense of gratitude to be standing in the start gate at the end of the road, filled with highs and lows, that brought me there. Taking a moment to realise where I was and what I was doing made me feel really content and anything that happened from there was a bonus,” he said.

Queenstown skier Blake Marshall, making his debut on the Freeride World Tour, finished in seventh place, starting his run with a 360 at the top of the course and scoring well for speed and style all the way to the finish line.

“I feel very grateful to be skiing alongside some of the best freeriders in the world,” said Blake. “I’m so happy to have stayed on my feet and even more stoked on the result.”

NZ’s Craig Murray (Wanaka) was the first to drop in the men’s ski category and finished in 12th place.

“It was a fun morning!” he said. “I was dropping first which was a little tricky as we weren’t super sure on the snow quality so I skied a run I knew I could land and have fun on the way down. There were a few minor issues, but I was really happy to stay on my feet and warm into the season after coming back from injury."

Craig won the FWT Kicking Horse, Canada in 2019 before a crash at the Fieberbrunn, Austria stop took him out for the rest of last season.

Jess Hotter (Ohakune), also competing for the first time on the Freeride World Tour, found a unique line and had one of the fastest runs in the women’s ski category, finishing in sixth place.

"It was a beautiful day to be competing and I feel like I learnt a lot in that one run alone," said Jess. "There's lots to work on for next time so I ski to my full potential! I was super stoked to be there with such amazing and talented, hard working people."

The next stop on the Freeride World Tour will take place in Kicking Horse, Canada between 6 – 12 February. 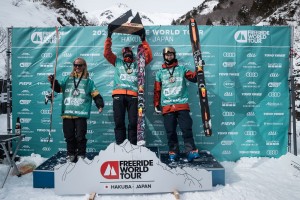