In a huge day of racing, NZ athletes Alice Robinson, Adam Hall, Corey Peters and Aaron Ewen have all finished on the podium at Super-G races held during the QRC Winter Games NZ, fuelled by Forsyth Barr at Coronet Peak.

Cold temperatures and blue skies cleared the way for back to back Alpine Ski Racing Super G events today following Monday’s postponement due to weather with the running of both the Australia New Zealand (ANC) Cup and World Para Alpine Skiing (WPAS) Southern Hemisphere Cups on the Hurdle course at Coronet Peak.

A challenging first course set saw a high casualty rate as many athletes carried too much speed off the steep sections sending them wide and out of course as they navigated the gates directly below the jump situated at the halfway point of the course.

Home mountain hero Alice Robinson used her years of growing up free skiing the Hurdle to her advantage and found speed when it mattered to finish fastest in both races securing the yellow ANC bib for the coming Northern Hemisphere race season.

"It was a tough and technical course set for the first race. I tried to arc it more on the pitch and make less mistakes than others over the jump. I was able to clean up a few little things from the first race and hold my speed in the second race”, said Robinson.

Olivia Foster (Great Britain) and Carole Bissig (Switzerland) rounded out the podium for the first race while Alex Tilley (Great Britain) and Barbara Kantarova (Slovakia) filled the minor positions in the second Women’s Super G. Eliza Grigg was the next best of the Kiwis finishing 5th and 8th respectively in both races.

The Para Alpine athletes showed just how much speed they can generate and hold on a steep pitch as they also took to the Hurdle course for the Southern Hemisphere Cup. New Zealand’s two time Paralympic gold medallist Adam Hall took honours in the standing division while sit skiers and fellow Paralympic medallist Corey Peters and up-and-coming Aaron Ewan finished first and third in the first of the two races held.

Honorary Kiwi and Queenstown local Patrick Halgren of the United States announced his arrival on the Para Alpine racing scene making the first podium of his career in the second race of the day proving that his big mountain freeride skills have stood him in good stead when it comes to racing on hard snow and around gates in his quest to make the US Paralympic Ski Team for 2022.

The first men’s ANC race took the highest DNF rate of the day with only 14 of the 25 starters completing the course.

“I watched the women and made a plan with my coach to slow down and compress the jump to hold my speed through the flats”, said Belgium’s Armand Marchand after his conservative approach worked in his favour seeing him fend off Adam Zampa (Slovakia) and Marcus Monsen (Norway) with Kiwi Willis Feasey securing sixth.

A slightly revised course set for the second race saw a much higher completion rate as Maarten Meiners of The Netherlands summed up the feeling of many racers, “I executed the second race a lot better than the first. The first race I had too much speed”. The Swedish duo of Olle Sundin and Tobias Hedstroem took second and third while Willis Feasey continued his presence in the top ten to take the ANC bib for the men.

The Super G races signalled the long awaited return of speed events to Coronet Peak after significant investment by both the mountain and Winter Games NZ to acquire the necessary safety netting to hold a FIS homologated Super G event.

“It was important for us to bring the Super G event back to Coronet Peak. We have chosen to make that commitment as a mountain to invest in our athletes of the now and of the future”, stated Nigel Kerr, General Manager of Coronet Peak.

Alpine Ski Racing continues at Coronet Peak Friday 30 August until Monday 2nd September with the Giant Slalom and Slalom events. The complete schedule can be found at https://www.wintergamesnz.kiwi/sports/alpine/

Full results from the Alpine Ski Racing Super G events can be found at https://www.wintergamesnz.kiwi/results/?cate=alpine 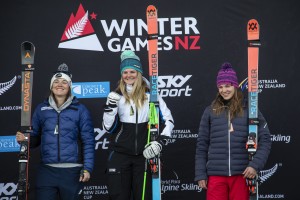