With bad weather in the forecast for Saturday, the decision was made to race both Super-G and Giant Slalom on Friday.

Mikayla Smyth and Alex Jackson carried their winning form from day one’s Slalom to deliver winning runs in the Super-G and Giant Slalom and claim their respective titles. Mikayla tied for first place in the U16 Super-G with Olivia Flight (Queenstown Alpine Ski Team), and in the Giant Slalom came from behind to overtake first run U16 women’s leader Helena Knight (QAST) for the age group win after run two.

Hemi Meikle (Team TC) also showed his consistency across all three disciplines, taking out the U14 men’s championship title. As well as topping his age category in every race, Hemi recorded the third fastest time overall in the Super-G and fourth fastest in Slalom and GS.

Ruby Fullerton put down to two strong runs in the Slalom for a convincing win in the U14 category. The Super-G was a hotly contested race, with first racer out of the gate Charlotte Wiggins (CAST) coping well with challenging soft snow conditions and laying down the fastest run amongst U14 girls. Only hundreds of a second separated Brooke Hutchison (CAST) in second and Ruby in third.

The afternoon’s GS saw Ruby back on winning form, topping the U1 women’s podium, Charlotte Wiggins in second and Coco Shale (CAST) third.

A small but competitive contingent of U19 athletes contested the three disciplines. Lily Scott (CAST) was first in GS and Super-G , Megan Rolleston (RSS) second. The sole competitor in the U19 men's group, Cole Scott finished strong in all three races, claiming his rightful place on the podium.

A prizegiving was held at the Cardrona Hotel after racing yesterday and the four champions will be presented with their cups at the Snow Sports NZ Annual Awards ceremony being held this evening.

The Alpine Youth Championships were added to the calendar this year as part of Snow Sports NZ’s strategy to provide a better youth development pathway for Alpine ski racing. The event will be followed by the Snowvision NZ Alpine Youth Camp for qualified participants. Following the camp, the Snowvision NZ Alpine Youth Squad will be announced. These athletes will be ranked and offered quota spots at Youth International Alpine competitions in the upcoming northern hemisphere season.

About the Snowvision Foundation

The Snowvision Foundation is a charitable trust which was established in 2005 to support and resource snow sport development and training programmes. Since then, Snowvision has supported snow sports across a number of disciplines, including the New Zealand National and Development Ski Teams, junior development camps, top athletes, and other initiatives, as it continues to encourage participation in snow sports, aiming to help talented Kiwis to succeed on the international stage. 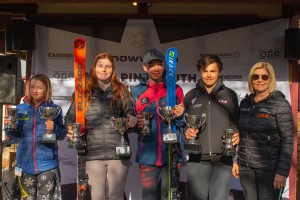