Mammoth Mountain, USA (9 March 2019) - Nico Porteous has finished in second place on the 2018-2019 Freeski Halfpipe World Cup tour rankings following the final competition of the season held on Saturday at Mammoth Mountain in the USA.

Initially scheduled for Friday, the Halfpipe competition had been moved to Saturday following a long series of weather and scheduling-related problems. And while Saturday brought a major improvement in weather conditions, unfortunately the bluebird skies didn’t hold for long, with dense clouds and wind gusts coming into play as soon as the first riders started dropping in for their training runs.

Second place on the day went to Simon d’Artois, who scored his second top-3 World Cup finish in 2018/19 with his 93.80 points run, while Thomas Krief (FRA) came in third with 86.60 points for his first podium of the season. With the second place finish at Mammoth, d’Artois jumped into first place in the overall halfpipe ranking and took his career’s first World Cup title.

Nico Porteous ended the season in second, after struggling to put a run down at Mammoth and finishing in 16th place in the finals. Knowing that D'Artois and Wise would be pushing hard for the overall win, Porteous went for the no-holds-barred approach, gaining huge amplitude out of the pipe in order to spin his biggest tricks but came unstuck and couldn't get the points on the board. 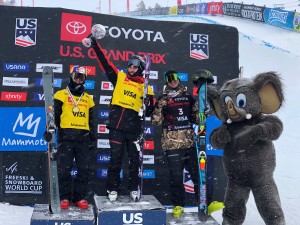