After Mother Nature called the shots yesterday and the men’s qualifying rounds were called off due to poor visibility, it was different story this morning and qualifying rounds took place at 8am under blue skies. 10 men from a 30-strong field then progressed to the final rounds later in the day.

With the likes of two-time reigning world champion Aaron Blunck (USA), 2018/19 halfpipe crystal globe winner Simon D’Artois (CAN) and NZ’s own Miguel Porteous (Wanaka) in the mix it was always going to be a heavyweight battle.

Simon D’Artois left no doubt about his plans for the day, scoring a 92.60 on his first run to earn the top qualifying spot. Miguel Porteous also secured his ticket to finals on his first attempt, with an 86.80 which initially had him in second place after run one before he dropped back in to third following a stomped second run from Birk Irving (USA).

Team USA came out firing with Jaxin Hoerter, Taylor Seaton, Aaron Blunck and Lyman Currier all making the top 10 and up against a strong Canadian contingent also including Brendan Mackay and Sam McKeown for the finals.

Finals competition got underway at 11am and there was no taking easy even as the first FIS Freeski Halfpipe World Cup of the 2019/20 season.

Eileen upped her second run, increasing her score to an 89.00 but couldn’t quite catch Kexin. Nevertheless, she was delighted by a new career best result.

Russia’s Valeriya Demidova was on strong form all day, landing three solid runs for a top score of 87.80 on run three, putting her in to third place overall.

The men’s finals competition stepped up to a whole other level from the morning’s qualifying event.  In the words of the USA’s Jaxin Hoerter “it’s a lot bigger than qualifying, the boys are getting sendy.”

Birk Irving set the bar with a score of 95.00 and the lead on run one but never got the chance to relax as the rest of the field threw down every run, and he had to keep pushing hard to be assured of the win. Birk’s third run was indeed his best, the judges rewarding for progressive tricks, including two double flips, huge amplitude and good execution and upping his score to 95.60.

“I’m just really excited to land that run, those are tricks I’ve wanted to do for such a long time,” said Birk. “It’s insane to put that run down today, I’m beyond words. The pipe was perfect, everything just lined up and ended up working in my favour, I couldn’t be happier.”

In the end Birk couldn’t be toppled, although Noah Bowman (CAN) gave the scoreboard a good nudge, laying down perfect back to back switch doubles and scoring 93.40 on his last run of three to finish in second.

NZ’s Miguel Porteous took a heavy crash on his first run and consequently did not start his second or third runs but thankfully avoided major injury. 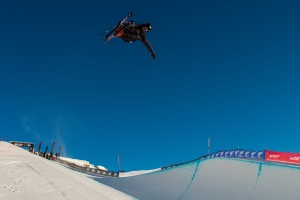