Hotter chose a unique line down the course, making creative use of the features and showing no hesitation as she hit some big cliff drops and stomped her landings. After the competition, she revealed that  she'd had to make a few last minute calls on her way to victory.

"It turned out during the run that some things that i thought were good cliffs didn't even have take-offs when you got on top of them so the top section became a bit of a winging it situation. It was definitely a bit of a scary moment when I hit that main cliff and didn't know if I was going to clear the rocks."

The judges rewarded her with a score of 80.00 points and the win.

It is her third win of the season which started with The North Face Frontier event in August as part of the Audi quattro Winter Games NZ. Hotter then won the Open Faces Silvretta Montafon four-star competition in Austria in February. She currently tops the tour rankings for women’s ski and with one event left to run, in Obergurgl, Austria in April, is on the cusp of claiming her place on next year’s Freeride World Tour.

In the men’s snowboard category Finn Duffy was fast out of the start gate, linking together two airs at the top of the course before landing a backflip off his third feature and carrying huge speed in to another technical rock drop and landing smoothly. The judges liked his aggressive style and awarded him the win. 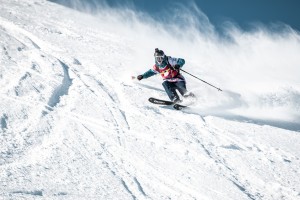