“I’m elated, it couldn’t have gone better,” said Jess after her run. Sticking in the fall line and seeking out technical terrain, Jess charged down the face, scoring highly across all judging criteria: line, fluidity, control, air & style, and technique.

"I stuck to my plan, which I am very pleased about as it's something I always need to work on," explains Jess.  "The snow was good and throughout my run, I just kept thinking about staying fluid and fast."

A highlight of her run, a huge air at the bottom of the course, Jess said, “I was in the air thinking that was bigger than I expected but the landing was perfect and I’m really happy to stomp it.”

This is the first season on the Freeride World Tour for the 26-year-old from Ohakune, after she dominated the qualifying tour last season with three wins in four-star events.

"I am really stoked to see where women's skiing is going and I look up to every single rider who hit the face that day," she said.

It was a good day all round for the NZ contingent with Craig Murray finishing just off the men’s ski podium in fourth place and Blake Marshall one spot behind him in fifth.

"It was a super fun day with a lot of Kiwi friends there watching," Craig explained. "I decided to go to the skiers' right zone; however, I ended up making a mistake early in my run. Luckily I managed to improvise a few features and stay on my feet, coming away with fourth place was more than I could have asked for."

“I’m super happy to put down another good run,” said Blake. “I felt a little uneasy watching so many people fall before me, so I took a more relaxed approach and it worked out.”

Hank Bilous, looking “to put the Kiwi stamp on this face” took a creative approach to the course and sent a huge 360 off the exposed terrain at the top of the course, scoring well for air & style but less so for line and control, and finished in 13th place.

"I really enjoyed skiing my run," said Hank.  "The conditions were pretty much perfect and I was amped to ski my line. Unfortunately I didn’t quite get the score I was looking for but I stayed true to myself and my style and that matters more to me than the score." 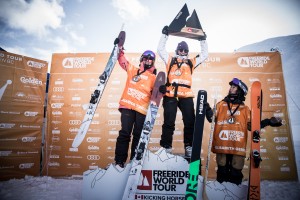