The 33 male and 10 female competitors made the most of clear calm conditions, throwing down some of their most technical rail and jump tricks and gunning for a spot in Sunday’s finals. 10 men and six women would make the cut, determined by the best scores from two runs, including NZ's Ruby Andrews, Laura Wotton, Ben Barclay, Jackson Wells and Luca Harrington.

ANC Freeski Halfpipe winner Eileen Gu (CHN) was back on form, posting the top score (84.66) of the day with her second run. 14-year-old New Zealand skier Ruby Andrews (Queenstown) held the lead after the first run, putting together the most technical rail run of the morning and landing 82.66. She was looking to tidy up her second run and re-take the top spot but couldn’t quite lace up the backside 450 on jump one.

“I was hoping to up my score but I’m still super stoked to qualify in second,” said Ruby after the competition.

In the men’s field it was another Kiwi in the lead after the first run with Ben Barclay (Auckland) showing good variety on the rails and ticking the boxes on trick difficulty and solid grabs, landing 82.00 on his first run.

Japan’s Taisei Yamamoto put the hammer down on run two, with a technical rail section up top and huge amplitude on the jumps, landing a 91.33 for the top qualifying spot.

NZ’s Jackson Wells (Wanaka) had the most unique rail line of the day, the only competitor to hit the wall ride feature, and impressed the judges with progressive jumps using multiple axes. With two solid runs in the bank and a top score of 80.33, Jackson was through to finals in third place.

Japanese skiers Gen Fujii and Toma Matsuura qualified in fourth and fifth place respectively with Luca Harrington (Wanaka) the third of the NZ men to make the cut, in sixth place.

With Australian skier Cameron Waddell through in ninth place, the finals also promise to bring a close competition for the ANC yellow bib. The Kiwi or Australian athlete who wins the 2019 FIS Australia New Zealand Cup (ANC) series will win themselves a coveted personal World Cup start for the 2020 season. The Winter Games NZ Slopestyle is the final event in the series. 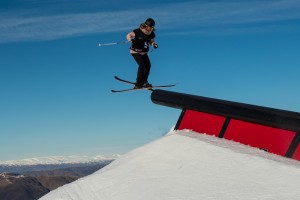