Cardrona, New Zealand (3 October 2019) –It was a jam-packed schedule of events on day three of the Snow Sports NZ Junior Freestyle Nationals at Cardrona Alpine Resort today with competitors in action in the International halfpipe as well as on the slopestyle course.  Scroll down for the highlights video.

With stormy weather closing the mountain yesterday, halfpipe competition for U8 – U12 skiers and snowboarders was moved to today. The U14 – U18 athletes will compete in the 22ft Olympic pipe tomorrow (Friday 4 October). All age groups also competed in the Salomon Ski and Snowboard Slopestyle with younger competitors in the Lil Bucks Park and older age groups in Stag Lane & Antlers Alley.

At just nine-years-old Olivia Hein (Wanaka) has recently been crowned Snow Sports NZ Slopestyle Series U14 Freeski girls champion. Today saw her competing in the U10 age group and putting together standout performances in the halfpipe as well as in the park. Good amplitude, solid grabs, back to back alley oops, and a 360 to switch 180 at the bottom of the pipe gave her the winning score. She carried her form through to the afternoon’s slopestyle event scoring in the 90s for a run incorporating back to back switch 360s on the jumps and a switch 270 on the first box feature.

Younger brother Riley Hein competing in the U8 freeskiers also wowed the judges by spinning a switch 180 to right 360 on the jump features and switch to switch on the box, for the slopestyle win in his age group, backing up his win in halfpipe earlier in the day.

Estonia’s Grete-Mia Meentalo impressed the judges by spinning her halfpipe tricks in multiple directions, holding her grabs and getting good amplitude, putting her in first place in the U12 freeski girls. She backed up her win in the halfpipe with the biggest spins of the day on the Lil Bucks slopestyle course, landing right and left 540s on the jumps for her second gold medal of the day.

Luke Harrold (Wanaka) topped the U12 freeski boys’ halfpipe, coming back from a crash on a first run attempt to land back to back flairs, to stomp a very technical second run including left flair, alley oop, left 360, switch right 360, straight air, alley oop mute. He followed a similar script in the slopestyle competition, crashing on his first run through the course before coming back to stomp his second run and win the U12 boys freeski slopestyle gold.

Ava Beer (Te Anau) was in a class of her own in the U12 snowboard category, winning the halfpipe by spinning above the lip of the halfpipe with a big frontside 360 and cab 360. Over on the slopestyle course she also span tricks both ways and completed most of her run switch, scoring her ahead of the rest of her age group.

Over on the bigger park, Cool Wakushima (Queenstown) claimed her third win of the 2019 Junior Nationals today, putting her in a good position to take out the overall title. The judges awarded her top marks in the U18 women’s slopestyle for her technical tricks and stylish execution. Her run started with a cab 270 in boardslide 270 out, 50-50, front 360, front 180, cab 540, wildcat, finishing with a front 720.

National Development Snowboard team member Lucia Georgalli (Wanaka) was also on top form today, winning the U14 category with her boardslide, 50-50, backside 540, half cab and wildcat to finish, standing out in her age group with bigger tricks and good flow throughout her run.

It was a double win for the Melville Ives twins in the U14 category.  With Estonia’s Henry Sildaru ahead on a massive 93.33 after run one of the freeski, Finley Melville Ives had to produce something special, so opted to hit the high rails, nailing a right 270 on to the down rail, then a left 270 on to the high North Face rail. A stylish jump line incorporating left cork 720 tail grab, right cork 900, switch left cork 7 mute tweaked, with good amplitude, sealed the deal, earning him a score of 95.67 for the win.

In snowboard, his brother Campbell Melville Ives had the win in the bag with his very first run but gave things a tidy up to improve his score from 86.33 to 93.67 for a convincing win.

Zephyr Lovelock was a clear winner in the U16 boys’ snowboard, the judges rewarding him for style, creativity and the biggest spins of the day including front 720, backside 900, frontside 720 on the jumps.

The freeski judges rated U16 competitor Ruby Andrews (Queenstown) as one of the stand out performers across the entire field, with style and execution on point and an outstanding first run which turned out to be her safety run but still earned a massive 94.67 points.

“I didn’t have many practice runs so I took it a bit easy, got the grabs and just stomped it,” explains Ruby. “I went for a bigger trick on the second run (a switch 720 on jump two) but didn’t get it.”

The 2019 Junior Freestyle Nationals are due to wrap up at Cardrona Alpine Resort tomorrow with the U14 – U18 Salomon Ski and Snowboard Halfpipe. 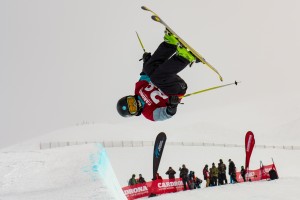