Dew Tour Wrap Up - Podium Places & Rookie of the Year!

Copper Mountain, USA (9 February 2020) – Nico Porteous has finished in third place in the men’s Freeski Superpipe at the Dew Tour in the USA.

Competing in a 10-men final, athletes were allowed three runs each through the one-of-a kind ‘modified superpipe’ course, judged on overall impression, creativity and amplitude. With more than eight inches of fresh powder at the start of the final, all competitors were tested on their ability to switch up their tricks and adapt to changing weather.

Nico’s first run initially had him sitting in first place, with highlights his double 1440 on the shark fin feature followed by back-to-back 1260s. Pushing to hold on to the top spot, Nico couldn’t stick the landings on his second and third runs.

Noah Bowman (CAN) clutched his third and final run, scoring a 95.00 for the win, with Gus Kenworthy (USA) climbing up in to second place and Nico pushed back to third.

It is Nico’s second podium finish of the 2020 Dew Tour, following a win by his team Atomic Skis in the Team Challenge on Thursday 6 February.

The team including, Nico Porteous, Sabrina Cakmakli (GER), Fabian Bosch(SUI), Megan Oldham (CAN), and Lukas Mullauer (AUT) earned the second-highest score in slopestyle, dominated in the Toyota Modified Superpipe and backed it up with the highest score in streetstyle.

Nico earned the top score for the team in the Superpipe, throwing a double 1080 out of the pipe to drop-in feature, despite challenging weather conditions.

Inclement weather has been problematic throughout the four-day event and with huge snowfalls over the weekend, the courses were running slow this morning. The women’s snowboard slopestyle field, including NZ competitor Zoi Sadowski-Synnott opted for a shortened course, competing only on the rail sections of the course and not the jumps.

Zoi put down a solid first run for a score of 85.66 to put her in second place with two runs left to go. Struggling for speed on her second and third runs Zoi was unable to improve her score and just dropped out of the medal spots in to fourth place when final rider of the day Anna Gasser jumped in to third place.

One of the youngest riders in the competition at 18-years-old Zoi, was named ‘Women’s Rookie of the Year’ at the annual Snowboarder magazine Awards held during the Dew Tour on Thursday evening.

The action-packed weekend wrapped up with the Ski Slopestyle Women’s Final, featuring the talents of new faces and accomplished veterans. NZ's Margaux Hackett,  got the call up from third alternate and finished her day in sixth place.

As snow continued to fall, the onus was again placed on the rail garden as another vote by the athletes and Dew Tour organizers were made to transition the Women’s Ski Slopestyle competition into a best-of-three, rails only format. Mathilde Gremaud (SUI), Johanne Killi (NOR) and Maggie Voisin (USA) took full advantage of what the course had to offer, showcasing new and difficult tricks and big spins in both directions to claim the podium. 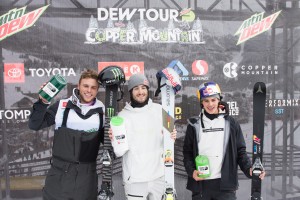