It was crunch time at the fourth and second to last stop of the Freeride World Tour 2020 with the cut off being made for the finals in Verbier and to qualify for FWT 2021. Only the top 13 male skiers would be going through to the finals and heading into last night’s competition, Craig Murray was sitting right on the bubble in 13th place on the rankings. To add to any nerves he may already have been feeling was the fact that at this event in 2019 Craig suffered a season-ending injury.

Last night he was back in the hot seat, coming storming out of the start gates and landing two huge tricks on the upper section of the venue, including a massive 360 right above the exposed terrain. Maintaining his speed all the way to the finish gate, Craig’s run earned him green lights across all judging criteria: Line, fluidity, control, air & style and technique, and a score of 96.67 from a possible 100 points.

"With some fresh snow and a bluebird day it was set up to be a good show for the fourth Freeride World Tour stop," explains Craig. "I had a later bib so I got to watch the boys and get inspired before my run. It was intimidating being back on top of the peak that I broke my heel on last year, with a lot of thoughts going through my head making it hard to concentrate. I decided to just go for it and trust my skiing to handle the rest. Luckily I landed everything and managed to control the speed. I couldn't believe how good it felt to land a run I wanted to do and to finish on the top of the podium was a bonus. It was even more amazing to have the fellow Kiwis Hank and Blake in third and fourth positions!"

Blake Marshall was the first of the NZ men to drop in to the course, setting the bar with fast fall line skiing and plenty of tricks and earning a score of 85 points which put him, briefly, in to the lead before Hank Bilous dropped in right behind him and upped the ante with a score of 91.67. Hank had spectators holding their breath as he headed in to exposed terrain and landed a huge cliff drop. Landing switch off his next take off, Hank looked more than comfortable as his boosted across a huge transfer gap and down to the finish line.

An impressive run by USA skier Issac Freeland saw him finish in second place, just edging Blake Marshall in to fourth and preventing an all-Kiwi sweep of the men’s ski podium.

First to drop in the women’s ski field, Jess Hotter put down a gutsy run, with an aggressive line and big tricks which would have given her a good shot at the podium had it not been for a crashed landing on her backflip near the bottom of the course. While not the result she was looking for, Jess is now ranked fourth overall on the tour which means she has qualified for the finals in Verbier, as well as next year's FWT.

The weather window for the FWT20 Finals, known as the Verbier Xtreme, is 28 March – 5 April. 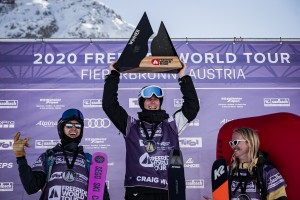