Competing in the men’s sitting category, Corey put together a fast first run putting him just 0.78s behind leader Taiki Morii (JPN). A mistake coming into the flat section on run two cost him several seconds but not the podium and he held on for second place. Akira Kano (JPN) finished another two seconds back in third place.

A rare tactical error saw Adam Hall (Wanaka) finish his day with a disqualification on run one.

“It was a good technical course in which many athletes were having trouble and getting disqualified, myself included, by a terrible tactical error,” Adam explains.

Only the seventh time the double Paralympic champion has recorded a DSQ, he said it was still “another good day of Slalom. I was feeling much better on my skis than yesterday.”

Both Adam and Corey are looking forward to getting in to speed mode tomorrow with Super-G next on the schedule. 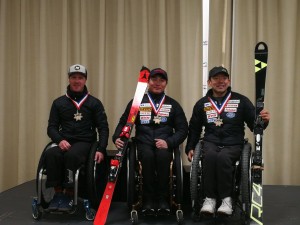