The Para alpine team are competing at their northern hemisphere training base of Winter Park in Colorado, using this race series as part of their preparation for World Cups later in the season.

“Even though the field isn’t as strong as the World Cup I’ve been trying really hard to push my skiing and treating it like a World Cup, being as clean and fast as possible in preparation for the upcoming World Cups,” explains Corey.

The go-hard-or-go-home approach ended in a DNF for Corey Peters on day one (Wednesday local time, Thursday NZT) who held a five second lead after his first run but skied out on his second. Today’s race started the same way with Corey once again well ahead of the field by five seconds after his first run and this time holding on for the win.

“The difference was yesterday I tried to push a little too much and skied out. Today even with a big lead I skied tactically better finishing with a 10 second margin,” Corey explains.

Aaron Ewen, competing in his first races of the northern hemisphere season, was on solid form, finishing in second place on both days.

WPAS racing continues at Winter Park tomorrow with the Super-G and Adam Hall also on the start list. 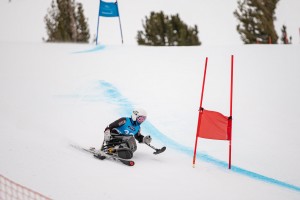