Ben Barclay was never in doubt for a podium placing as soon as he had the first run on the scoreboard, taking the lead right from the get-go with a score of 87.33. Scoring highly for the difficulty and variety of his rail tricks and then backing up with well-executed and technical jump tricks, the win was his for the taking.

“I’m over the moon with the win,” said Ben after the competition. “It was a long road after that high score being on my first run, I was pretty anxious throughout but overall I couldn’t ask for a better result.”

With three ANC podium placings this season (including first and second in Freeski Big Air) the 17-year-old is well set for the upcoming Northern Hemisphere season.

Taisei Yamamoto (JPN) also had a high scoring first run with a technical rail section and big clean grabs on his jumps but lost points for a small bobble on the rails and finished his day in second place.

A delighted Luca Harrington (Wanaka) claimed “the biggest result I’ve ever had”, finishing in third. “I’m in shock, I’m in disbelief, I’m just so happy right now,” he said after the competition.

Although not quite the run he had in mind, Luca scored 80.66 on run one and upped that to 83.00 on run two, finishing with a huge switch left double cork 1080 safety.

Ruby Andrews backed up her qualifying result to finish in second place in today’s Women’s Freeski finals. Ruby landed her top score on her third run, showing well-executed rail tricks, and making an impressive come back from a crash on her second run.

“It was pretty nerve-wracking but I just got out there and stomped it,” said Ruby.

Eileen Gu was the deserved winner, getting solid grabs on every spin and demonstrating solid trick execution throughout her run. An 88.33 on her first run of the day was enough to seal the win.

“I think today it came down to style and consistency. I was really focusing on trying to make everything clean, everything grabbed and I think that worked out well for me,” said Eileen after the competition.

Australia’s Abi Harrigan jumped up in to third place on her very last run by adding a 720 as her second jump trick and being duly rewarded with an increased score.

One of the most experienced athletes in the competition and celebrating her 26th birthday today, World Cup ranked number two Silje Norendal landed three solid runs in the Women’s Snowboard, saving her best for last with a winning score of 95.33 on run three.

“I had a lot of fun on my last run and fun riding with all these girls. Second place is eleven years younger than me!” laughed Silje after the competition, going on to congratulate second-place-getter Melissa Peperkamp (NED) on her strong riding and the stomped 720 at the end of her run.

Melissa was on impressive form all morning, landing three good runs and earning her place on the podium with her second run. She said that she was “very happy” with her result.

Third place on the women’s Snowboard Slopestyle podium went to the FIS Junior World Champion, Sommer Gendron (CAN) who kept her calm after bobbles on her first two runs, finally stomping her 720 on the last jump of her third run.

The men’s competition saw a few shuffles in the rankings before the final podium placings were locked in. Hiroaki Kumitake (JPN) set the bar with a first run score of 92.33 but countryman Ryoma Kimata went one better, coming back from a crash on his first run to land 93.33 on his second run and jump in to first place.

Easing back in to his first competition since March 2018, Norway’s Torgeir Bergrem “just tried to keep it clean and not do the most technical run but make it look really smooth.” He was happy enough to get a solid first run down for a score of 87.00 but was looking to step up on his next two runs.

Unable to do so, he held on to third place while the rest of the field took their third runs, with the expectation that top-place-getter Matty Cox (AUS) would come through and knock him out of the top three.

But today simply wasn’t Matty’s day, with uncharacteristic slip ups on the rails on his first two runs and a hand down on the second jump of his third run it was “a rough day in the office” and he would finish 10th, with Torgeir claiming third.

The day didn’t go quite how NZ athlete Mitchell Davern (NZL) would have hoped. Qualifying top of his heat in yesterday’s competition, Mitchell got his first run down clean but needed a big step up to lift his score of 74.66 to match the podium. He couldn’t execute and finished his day in seventh. 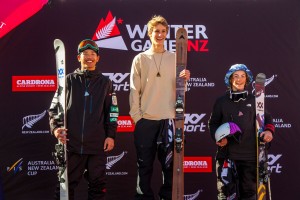