Starting from bib seven, Robinson – who is now ranked 10th in the world for women’s GS – took a convincing 2.01s lead in run one and stretched it to 3.34s ahead of GB’s Cara Brown on run two.

“I’m really happy,” said Alice. “I knew I could have probably skied a little better in the second run but I’m just really happy to take away the title.”

The course was set on The Hurdle run where soft snow conditions added a challenge for the racers with the course getting bumpy and several racers, including defending champion Piera Hudson recording DNFs.

Racing continues tomorrow (Monday) with the Men’s Giant Slalom where Adam Barwood will be looking to defend his title.

The Men’s National Slalom Championship title will be contested on Tuesday followed by the Women’s Slalom on Wednesday. 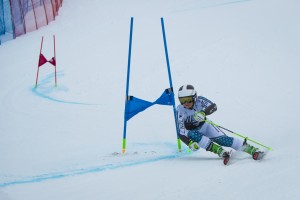