Sestrière, Italy (18 January 2020) – NZ Alpine ski racer Alice Robinson (Queenstown) has finished fifth at the Giant Slalom World Cup in Italy. It is her fourth top-10 finish at a World Cup this season.

Skiing what she later referred to as “a pretty conservative run” Alice was in sixth place after her first run, 0.59s behind leader Federica Brignone (ITA) who leads the World Cup rankings in the Giant Slalom discipline.

“It was again my first time on the slope so I wasn’t fully attacking!” Alice explains. “Second run I attacked fully and put down some of my best turns. Unfortunately, I still had a couple of mistakes that caused me to lose some time, but I’m pretty happy with my performance. It was a super tight race, so you have to risk it to be in there!

Brignone went on to claim a joint victory with Slovakian Petra Vhlova, with  the USA’s Mikaela Shiffrin just 0.01s off making it a three-way tie . 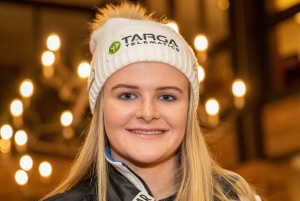