Adam Hall, who is a two-time Paralympic gold medallist in Slalom, does not usually race the Giant Slalom discipline but said he was very happy to be in the gates today and pleased with his two runs. "I don't often race GS, it's the first time in a number of years, but I do train GS so to bring that training to a race situation is good," Adam explains. "GS for me is something that helps out my other events like Slalom, Super-G and Downhill."

Skiing into the lead on his first run of two, Adam said that he was able to "ski tactically and technically better" on his second run to ensure a win.

Chinese athletes finished second and third with Biao Li in the men's standing silver medal position and Jingyi Llang in bronze. Just off the podium, in fourth place, was the USA's Patrick Halgren, back in the race gates after also taking part in The North Face Frontier 4* Freeride event earlier this week.

The Korean athlete maintained his form for run two, with Corey unable to close the gap and having to settle for a silver medal today.

"Second run I did what I should have done in the first, attacked it more," explained Corey. "One thing I'm trying to bring into my skiing with these two run events is being able to throw it down in both runs, not just one. But it was fun, full enjoyment, that's key."

Sang Min Han said he was "very happy" to take the win.

NZ's Aaron Ewen was in third place after his first run but a mistake on his second run cost him and he dropped back in to fourth, behind China's Hui Wang in the bronze medal spot.

Chinese athletes dominated the women's podiums in the standing and sitting classes.

Mengqiu Zhang held on to her first run lead to finish ahead of teammate Qingyn Wang. It was a similar story in the women's sitting with Sitong Lu putting together two strong runs for the win. Wenjing Zhang finished in second with NZ's Gemma Fletcher delighted to round out the podium in third place.

"I'm super stoked to race today, it was awesome, I'm so happy to finish both runs. My second run was a lot smoother, I was a little cautious on my first run," said Gemma. 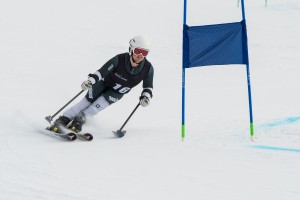