A fresh dusting of snow was a welcome sight on the otherwise sparsely covered Tulips Freeride course but competitors were warned to remain safety conscious, focus on showcasing strong ski technique for the judges and maintain fluidity throughout their runs.

The U12 and U14 men’s categories saw a fully stacked start list and were the stand outs for action. Cooper Breen (Queenstown) claimed the U12 win with some great fluid skiing, a big fall line air, followed by a linked right 360 and left 360 at the bottom, impressing the judges as the only competitor to spin tricks both ways.

Estonia’s Henry Sildaru – younger brother of World Freeski Halfpipe Champion and multiple X games medallist, Kelly Sildaru – dominated the U14 category, scoring 92.67 from a possible 100 for his phenomenal run. Coming fast out of the start gate, he looked entirely at home in the steep section at the top, threw down two big fall line airs, landed with impeccable control and finished off with a big cork 360 at the bottom of the course.

Winner of the U12 women’s category, Poppy Freeman (Darfield), set herself apart by heading for the exposed terrain and stomping her rock drops with solid grabs. In U16 women Ruby Hewitt (Hokitika) also took a fast line through the exposure with some good drops at the bottom of her run for the win in her group.

Fog and snow showers made it hard to see over on the boarder cross course in the morning but competitors rose to the challenge, boosting out of the start gate in the seeding runs, with the goal of making the afternoon’s head to head semi-finals and finals.

It was an action-packed final as competitors raced four at a time through the banked turns and rollers, often only millimetres apart with a few tangles on the way.

In the U14 girls, Lucia Georgalli (Wanaka) was fastest in the time trials and then took an early lead in the final but came a cropper midway down the course. Eliana Collins (Queenstown) saw her chance, grabbed the lead and crossed the finish line first, followed by Chelsee Kelley in second and Lucia in third.

The U16 men’s category saw a tight race between Zephyr Lovelock (Auckland) and Tui Wikohika (Raetihi), Zephyr getting the early lead, Tui chasing hard but Zephyr just holding on for victory.

The U18 girls came charging out of the start, with Cool Wakushima (Queenstown) in the lead, but only made it as far as the first corner before the three chasers took each other out, leaving Cool unchallenged for the win.

“As soon as the gate drops, you don’t think about anything else except for getting out of the gate as fast as possible and you’re just in your own zone,” explains Cool. “I was so focused I didn’t know the others had crashed, I was just looking ahead to the next flag and focusing on staying on my feet.”

Cool explained how she enjoyed the opportunity to compete in a range of different disciplines and used the Junior Nationals to build her overall skillset.

“Because I’m a slopestyle rider I don’t usually get the opportunity to do the other categories. It’s always fun trying new things and maybe you can find out something else that you’re good at. In boardercross you need to go fast, and you need to go fast in slopestyle as well. Snowboarding in general needs everything to come together so it’s good to do a lot of things. Junior Nationals is a good time to do it and it’s really fun at the end of the season too.”

The Junior Nationals continue tomorrow at Cardrona with the Salomon Ski and Snowboard Halfpipe. 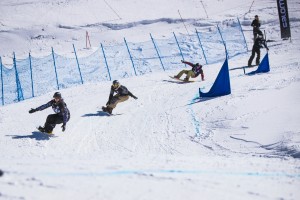