Cardrona, New Zealand (4 October 2019) – The Snow Sports NZ Junior Freestyle Nationals wrapped up at Cardrona Alpine Resort today with U14 – U18 skiers and snowboarders throwing down in the 22ft Olympic halfpipe. Scroll to the bottom of the page for the highlights video.

For some Junior Nationals competitors the day began early with an Australia New Zealand Cup halfpipe event which proved to be a good warm up. Freeskier Ruby Andrews (Queenstown) finished second in the ANC and went on to win the Junior Nationals U16 women’s halfpipe. Snowboarder Campbell Melville Ives also used the event as an opportunity to try out a new trick.

“It definitely gave me a bit more confidence, especially with my haakon flip,” explained Cam. “The haakon flip has been a goal for the year and I finally got it today for the first time in competition.”

The technicality of his tricks – including back 540, frontside crippler 720, haakon flip, alley oop rodeo – gave Cam a top score of 89.67 and the top spot on the U14 Junior Nationals podium.

It was also another good day of competition for Finley Melville Ives who won the U14 Freeski men’s event, dropping into the pipe and boosting a huge left 900 on his first hit, and following through with a stomped right 720 safety, switch left 540 and switch air.

In U16 women’s freeski it was also the technicality of her tricks as well as the amplitude gained out of the pipe which put Ruby Andrews into the top spot.

The U16 men’s freeski saw a close finish between NZ’s Harper Souness (Queenstown) and Australia’s Angus Falconer. Harper jumped in to first place with his second run with his left 540, right 540 combo at the bottom of the pipe securing him the win.

“My first run was a little messy, so I was trying to get it a bit better, I ended up doing a trick I hadn’t planned, the right 540 down the pipe. After my left 540 I was going to go into just a right straight air but then I thought I might as well send it.”

Flairs were the flavour of the day for men’s U18 freeski category, Connor Addis earning the win with a big mute grab to japan grab and signing out with the left flair.

Zephyr Lovelock (Auckland) secured his third win for the 2019 Junior Nationals, landing a huge front 900 and an unbeatable score of 91.33.

“It’s been a lot of fun, competing with my friends and I’m pleased to get some decent results,” said Zephyr who has

“It’s been a lot of fun, competing with my friends and I’m pleased to get some decent results,” said Zephyr who has won multiple Junior Freestyle National Championships and is now part of the Snow Sports NZ National Development Programme.

The 2019 Junior Freestyle Champions will be recognised at a prizegiving ceremony held tomorrow (Saturday) at the Lake Wanaka Centre at 4pm. 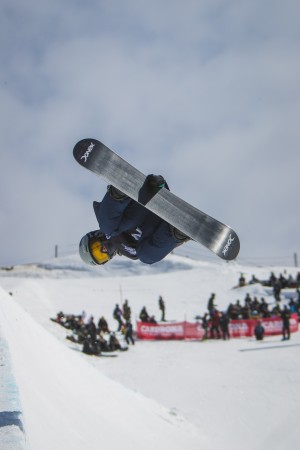