Calgary, Canada (16 February 2020) – New Zealand snowboarder Tiarn Collins topped the podium at the Calgary Snow Rodeo on Sunday (Monday NZT), and says after almost two years out with injury, “It feels good to be back competing and a win is insane.” This is Tiarn's first World Cup win.

Tiarn sustained a shoulder injury just days before he was due to compete at the 2018 PyeongChang Olympic Winter Games and has been battling to make it back to top form ever since. His only career slopestyle World Cup podium before today came just before PyeongChang at Aspen Snowmass in January 2018 - where he took third - but in Calgary he bettered that result in a significant way.

Tiarn signalled that he was on his way back to peak performance level with a fourth-place finish in Friday’s qualifying rounds of the Snowboard World Cup in Calgary, Canada. The heavy field of 50 riders featured some of the world’s best riders including X Games Aspen gold and silver medallists Darcy Sharpe (CAN) and Mons Roisland (NOR).

The creative course design provided myriad options with a three rail section at the top followed by a two-sided quarterpipe/tabletop hybrid, then a big hybrid jump with twin kickers and a rollover/butter section down the middle, and finally a straight-up monster booter to finish things off.  With the excellent weather offering near-perfect conditions, the men’s field was pushing hard for the podium throughout the day. However, riding at the edge often leads to mistakes, and there many small bobbles here and there that lead to reduced scores up and down the startlist.

Tiarn opted for a brand-new competition run for finals, “I picked a few solid tricks and a few that were really up there," he explains.

Opening with a new trick, a switch backside 270 on to pullback on the downrail, followed by a frontside boardslide through both rails of the transfer set-up, and then a cab 270 on 450 off on the up-rail, Tiarn earned solid scores on the rails  but it was on the jumps that he earned top marks despite a near miss on the cab 1440 nosegrab on the very last jump.

“I almost over rotated, I had to fight to hold on to it and was literally holding my breath right to the end,” he said.

But held on to it he did, and the judges rewarded him with a score of 80.50. Japan’s Ruki Tobita finished in second place on 79.53 points with Canada’s Liam Brearley third on 76.58. 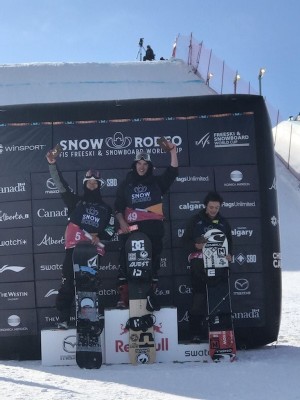