2nd September 2013 – Queenstown, New Zealand – Clear blue skies were once again the order of the day at The North Face® Freeski Open of New Zealand. Competitors in the Big Mountain qualifying rounds made the most of soft spring snow conditions today at The Remarkables Shadow Basin with Tone Jersin Ansnes (Norway) the top female qualifier and New Zealand’s Cam McDermid topping the men’s results.

In the Big Mountain discipline, riders are judged on overall impression with specific focus on line choice, control, air, style, fluidity and technique. With only one run to impress the judges in today’s competition, skiers, both male and female, sent it home with big air, fast, fluid tracks and some amazing skiing.

The female competitors were the first to drop into the Shadow Basin course this morning. Norwegian skier Tone Jersin Ansnes was the stand out performer, topping the qualifying table with a score of 8.28 ahead of second placed Lotten Rapp from Sweden with 6.85. The former alpine ski racer put together a fast, confident run taking two very quick airs at the top of the course and showing no hesitation dropping off the large rock feature at the bottom of the course.

“I did exactly what I planned to do,” said Jersin Ansnes.  “I held back a little to make sure I kept control and I really enjoyed the top section of the course.”

Second placed Lotten Rapp also put together a well-controlled run, managing to take the line she’d planned despite being slowed down by a problem with her goggles.

“This is a really inspiring venue,” commented Brook. “My run went exactly as planned. I picked a line where I could see every feature I wanted to hit and it paid off.”

Fellow New Zealander, Anna Smoothy, looked set to ski the run of the day, charging down the top section of the course with powerful turns before coming unstuck on the firm landing at the bottom of the course and falling out of contention.

New Zealand men claimed nine of the top 15 qualifying spots. Cam McDermid (Christchurch), fresh from his third place finish at last week’s Black Diamond Big Mountain comp as part of the CHILL series, had the run of the day, posting an impressive 9.48 score to top the men’s results.

Judges were impressed by his “epic run”.

“Cam is such a strong skier with so much talent and has finally shaken a bad drought of unlucky mistakes, landing the run of the day today,” said Head Judge, Dion Newport.

“I haven’t found the ceiling yet,” commented McDermid, indicating that he has bigger and better still to come in The North Face® Freeski Open Big Mountain finals.

17-year-old Aucklander, Ryan Read who learnt to ski at Snowplanet, stepped up the level of his skiing at his first major Big Mountain competition today, qualifying in second place.

“I skied the line I wanted and just tried to go as hard and as fast as I could and it paid off,” he said.

“Ryan’s skiing has progressed so much over the years and it shows how much he has been working to improve his technique,” commented Dion Newport.

“Hank was rewarded for skiing fast top to bottom, linking four good airs and stomping all his landings,” said Newport.

The Big Mountain finals will be staged at the Remarkables later in the week with the day and course to be determined by prevailing weather conditions.

Videos from the 2013 The North Face® Freeski Open are available to view at the following link: http://vimeo.com/thenorthfaceaunz 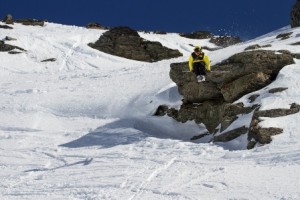 9 years ago
Freeski Open of NZ