Voss, Norway- (10 March 2013) - An eighth place finish in the slopestyle event marks another strong performance for up and coming skier Beau-James Wells, and the best result for the New Zealand team at the FIS Freestyle World Ski Championships in Norway.

Spread across two venues – one situated in the Norwegian capital at the Oslo Vinterpark for halfpipe, the other on the Norwegian west coast at the town of Voss for moguls, aerials, ski cross, and slopestyle – the 2013 Freestyle Ski World Championships ran from 5-10 March. New Zealanders competed in halfpipe, slopestyle and ski cross events.

Janina Kuzma (Wanaka) qualified ninth in the women’s halfpipe event on day one of competition. Showing good amplitude and execution in her run, Kuzma was rewarded with a spot in the finals.

The finals event has been heralded as “one of the best displays of halfpipe skiing to be seen in recent memory” with the female competitors showcasing strong skiing across the board. Kuzma finished the competition in 10th place, happy to have achieved a goal of finals qualification and to have landed her planned runs.

In the men’s halfpipe event Beau-James Wells (Wanaka) narrowly missed out on qualifying for the finals with his 13th place. Lyndon Sheehan (Wanaka) placed 16th and Jossi Wells 19th.

After a six hour train journey to Voss the Kiwis were eager to take on the slopestyle event. Faced with “a big, challenging” course but perfect weather conditions, the men’s qualification rounds were hard fought. Several of the top ski slopestyle athletes – including New Zealand’s own Jossi Wells, as well as Australian Russell Henshaw – were unable to make it through to the final 12.

The younger Wells brother, however, proved himself up to the task. After a messy first run and a sketch on the rail feature, Beau-James improved his execution on the second run claiming sixth place in his heat and earning his first finals spot in the slopestyle discipline at a major event.

Faced with a gnarly and technical course the young skier did well to land both runs in the finals and finish in eighth place. Tom Wallisch (USA) came away with the top result with Great Britain’s James Woods in second and Nick Goepper (USA) third.

Amongst other Kiwi competitors Hamish McDougall (Wanaka) placed 32nd while Nick Rapley’s (Dunedin) competition hopes came to an end after an official got in his way causing him to knuckle his first jump and tweak his MCL.

Anna Wilcox-Silfvberg (Auckland) impressed her coaches by handling the pressure of her first World Champs event while other, more seasoned, competitors floundered. Undeterred by a crash on her first run in the women’s slopestyle qualifications, Wilcox-Silfvberg knew what she needed to do if she was to progress through to finals. Mentally focussed, she was able to improve her score on run two and so qualify in 12th place.

As in the men’s event the female slopestyle finalists were faced with a tough ask, with some of the favourites like hometown girl Tiril Sjaastad Christiansen cracking under pressure and failing to land runs. Wilcox-Silfvberg landed her first run in finals but a crash on the first jump in her second run saw her finish in 10th place.

Jamie Prebble (Christchurch) was the last of the New Zealanders to compete in Norway, taking to a fast challenging course for the ski cross qualification rounds. The course featured some demanding jump-to-turn sections, technical step-up combinations, and one huge negative traverse which required a full quiver of ski cross skills.

Prebble, who is in his first season of international competition in the ski cross discipline, was satisfied with his 38th place which found him only 0.4sec from making the finals cut.

“What these results do show, is that the developing athletes, particularly Beau-James Wells and Anna Wilcox-Silfvberg, are on the heels of the senior pros,” says Light. “This bodes well for the future.” 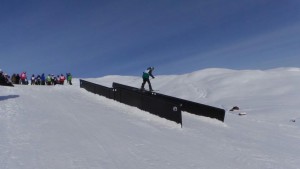