Shelly Gotlieb Best of the Kiwis at Snowboard World Champs

Stoneham, Quebec, Canada (18 January 2013) - In an event which saw 10 of the women’s field fail to start, having sustained injuries in training, New Zealand’s Shelly Gotlieb was “happy to survive another day”. Gotlieb placed seventh in today’s women’s snowboard slopestyle event at the World Snowboard Championships in Stoneham, Canada. She missed out on top six finals qualification by a mere 0.66 points.

Qualification rounds for the women’s snowboard slopestyle were scheduled to run yesterday but cold, windy conditions led to the event being postponed until today and the semi-final stage being removed; the top six female qualifiers would move straight through to finals along with the top 20 men.

After her disappointing results at last week’s International Ski Federation (FIS) World Cup in Copper Mountain, Colorado, Shelly Gotlieb was determined to up her game and hungry for a top result. Approaching the first jump of her first run she opted for a difficult cab 5 trick to backflip but unfortunately didn’t make the landing. Knowing that she needed to land a complete run, Gotlieb’s second run took a more conservative approach. A cab 5 to straight air, backside 720, 50 50 to indy grab earned her a score of 80. A place in the final looked likely until an American rider pulled out a score of 86.66 just bumping Gotlieb into seventh.

“It was a super challenging day, I had to really play the game to make it through,” she remarked. “Unfortunately I was .66 points from making the finals but overall it was a great day and I’m happy with a seventh. Thanks to the NZ coaching and support team for helping me through it.”

Despite landing their runs, team mates Stefi Luxton and Rebecca Torr failed to shine in today’s competition; Luxton placing 22nd and Torr 18th. Coach Tom Willmott said that while the results were disappointing, the conditions and course had been particularly challenging and that this was reflected in the high number of athletes who were injured in the training runs and subsequently failed to start.

The brutal course also took its toll on the male athletes, Kiwi Stef Zeestraten amongst them. After a strong performance in the men’s qualification rounds yesterday which saw him place third in his heat and sixth overall, Zeestraten was ready to put down an even better run. However, a huge crash in training and a painful “face meets knee” incident left him rattled.

Soldiering on into competition, nonetheless, Zeestraten couldn’t get the rotation he needed on a switchback double 1080 in the first run and he scored a low 41. The second run saw an improved performance and a higher score of 50.5 for 15th place. While not the result he was looking for Zeestraten also counted himself lucky to “live to fight another day.”

New Zealand’s Ben Comber finished the event in nineteenth place after coming unstuck on a frontside 1080 in his first run and a switchback 900 in his second run.

Coach Tom Willmott commented that the twenty man final format meant that the male competitors were “really going for broke” and the crash rate was high. The fact that all of the New Zealand athletes – male and female – were able to land at least one competition run was testament to their “grit and determination.”

The New Zealand snowboard team will now make good use of a training window before heading to Russia in February for the Sochi Winter Games test events. 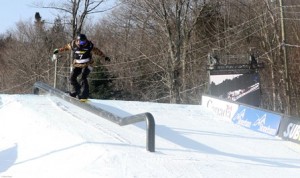