With the alpine ski racing schedule in full swing, New Zealand’s talented young skiers have been making the most of fantastic snow and weather conditions to post some impressive results.

The National Youth Series (NZYS) Giant Slalom (GS) and Slalom were held at Ohau Ski field on 16 and 17 August before moving to Coronet Peak for the NZYS and National Championships from 23 – 25 August.

Queenstown Alpine Ski Team (QAST) member Alice Robinson continues not only to dominate the u14 girls’ category but frequently to post the fastest times across all competitors. Alice won the Slalom and GS at the NZYS Ohau event before taking out both national titles at Coronet Peak the following weekend.

Georgia Bushell (Team Hutt) took out first place in u16 girls’ GS at Ohau and backed this up with another win in the GS at the National Championships at Coronet Peak. The u16 girls’ Slalom has seen a close battle for podium spots. Andie Gillings (QAST), Georgia Bushell, Sophie Thompson (QAST) went one, two, three in Ohau. Eden Mckay just missed the podium in Ohau but made her come back the following weekend, winning the national Slalom title with Georgia Bushell close behind once again in second place followed by Sophie Thompson in third.

Wanaka’s Julius Staufenberg had a successful weekend of racing in Ohau winning both the GS and Slalom in the u14 men’s category and then held on to podium placing at the National Champs placing third in Slalom and second in Giant Slalom. Auckland-based Will Cashmore was the stand out performer in u14 men’s racing at Coronet Peak, winning both the GS and Slalom national titles.

U16 men’s national GS title went to Thomas Knowles and u18 to Jackson Rich. Sophie Yandall took the u18 women’s GS and Slalom titles.

Snow Sports NZ would like to extend its thanks to the race departments at Coronet Peak and Ohau for their expertise in hosting the NZYS events. A big thank you, also, to Technical Delegates Nigel Brown (Coronet Peak) and Dave Grogan(Ohau).

A second Junior Alpine Development Camp was held at Coronet Peak last week thanks to the generous support of The Snowvision Foundation. Six young ski racers had the opportunity to be coached by US world cup ski team coach Chris Knight during the three-day camp.

“We’re very grateful to Fiona Stevens of The Snowvision Foundation and Chris Knight for getting on board with these camps. It’s a fantastic opportunity for our young racers,” said Snow Sports NZ Alpine Manager Ian Mclean.

Following on from last week’s National Championships, New Zealand’s senior ski racers have travelled to Mt Hotham in Australia for Australian New Zealand Cup (ANC) GS and Slalom. Piera Hudson (Hawke’s Bay/Wanaka) achieved a career best result in the GS on the first day of the four-day series with a 25.41 FIS point result and second place on the podium.

Cardrona Alpine Ski Team coach Jonny Rice said, “Weather and snow conditions for the lead up here at Hotham have been challenging but today was good and the course crew worked hard to keep the pitch well maintained. I was particularly pleased with Piera’s second run and the results speak for themselves.”

Piera commented, “I was frustrated with my first run and skied more aggressively in my second. It is my first time racing in Australia and I am really looking forward to tomorrow’s race.”

Racing continues at Mt Hotham today with the GS followed by the Slalom on Wednesday and Thursday. Live timing is available here:http://data.fis-ski.com/ 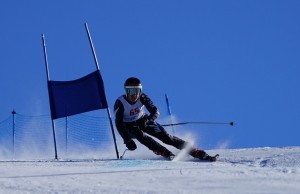