The North Face Frontier was Duffy’s premiere FWQ event after a successful career on the Freeride Junior Tour. To come away with a win under these circumstances is a huge start to his competitive career with the big kids on the FWQ. Finn is a true product of the pathway and support that’s being generated for up and coming freeride athletes in New Zealand and acknowledges the process that’s got him this far: “I think all those junior comps were worth it!”

New Zealanders Benjamin Jock Ewens and Rupert Smith followed on in second and third positions of the snowboard men category.

The kiwi conditions didn’t hold back the international competitors who have travelled from far and wide to throw down in the first events of the 2018/19 FWQ calendar. The remaining three categories were taken out by northern hemisphere riders.

The Ski Women podium was topped by Christina Wyss of Switzerland who skied a fluid line from top to bottom. As Christina stated, “I just let my skis run and tried not to crash!” We will be seeing more from Christina and all the other top competitors from each category in the 4* TNF Frontier event on Wednesday. Joining Christina on the podium was Moa Wärvik (SWE) in second and Heidi Livran (USA) in third.

Ski Men was a hotly contested category of 38 riders who were not willing to hold anything back. Tao Kreibich of Austria dropped in early on and had to sweat it out in the hot seat as some huge lines and features were sent to contest his premier position. Tao’s fast and technically sound line kept him hanging out on top, and his laid out backflip sealed the win for him.
“I’m adapting to the hardpack conditions after a few weeks skiing with the local crew. I love it here; I’ll definitely be back next year.”  Julian Jamesa Hampton – the flying Fijian – held it down in third position, while Freeride World Tour competitor Sam Lee treated the crowd to an entire bag of tricks and placed second. From the top down Sam rolled in quick succession from a safety grab, to a 360, to a cork 720, to a front flip, to a regular vanilla cliff, to a final and glorious 360.

No stranger to competing in New Zealand, Spain’s Nuria Castan Baron enjoyed another TNF Frontier podium, this time from the top spot. Nuria’s line had real flow and linked in some serious features putting her out in front of the other Snowboard women. She was all smiles at the bottom, in her own words: “I managed to find some good powder at the top, I really enjoyed it. I’m so excited!”  Also gracing the Snowboard women podium was Christina Bruno in second and Randa Shahin in third.

Keep a close eye on our channels for more from the 4* event of The North Face Frontier which should be dropping this Wednesday at The Remarkables, in Queenstown. 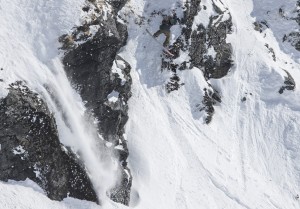