Competing under the lights at Canada Olympic Park, venue for the 1988 Olympic Winter Games, the young New Zealander never really looked in doubt for the win. He scored an impressive 94 points from a possible 100 on the first of his three runs.

“It was fun to ski under the lights tonight,” said Nico. “It was good to land my first run and that let me try some new tricks in the other two runs.”

With experimentation the name of the game from then on, Nico’s second run wasn’t as clean as his first but still good enough for a score of 83.80. He crashed out, unhurt, on his third run but by then the win was already in the bag.

US competitor Hunter Hess looked like he could be a threat with a first run score of 88.80 but only got as far as a 91.40 with his third and final run and in the end couldn’t topple the New Zealander from the top of the podium. Canada’s Mitchell Wilson was a close third on 87.80. 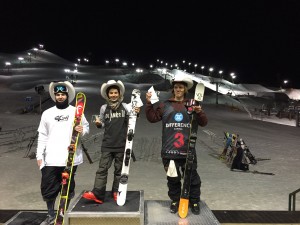