The Freeride World Tour is the premier big mountain freeskiing and snowboarding tour in the world, featuring the sport’s top athletes competing on the biggest mountain resort venues. Riders compete one at a time and receive an overall score from a judging panel based on numerous categories including line difficulty, control, fluidity, technique and style. The event features natural terrain features found on the most exciting format possible. A start gate is positioned at the summit with a finish gate at the bottom. The best complete runs win. The sport is similar in context to big-wave surfing with skiers and snowboarders choosing impossible-looking lines through cornices and cliff-faces and couloirs. Competition runs are enhanced with progressive big jumps and mach-speed turns at an aggressive pace.

Sam Smoothy (Cromwell) and Charlie Lyons (Christchurch) joined the strong field of men’s ski competitors, with Lyons making his debut on the Tour. For Smoothy today’s event was a chance for him to test his mettle and claim a coveted podium spot. At the 2012 edition of the Freeride World Tour he enjoyed a win in Chamonix, a second in Courmayeur and a third in Roldal before a series of crashes left him to claim fourth overall place.

Unfortunately, today’s event in Revelstoke didn’t bring the result Smoothy was looking for. Despite a strong run he ended the day in seventh place.

“I couldn’t quite get firing 100% today and placed seventh but felt good to not ski perfectly and still place well,” he commented.

For Charlie Lyons, however, the day brought about a happier result. A smart well-controlled run was enough to earn him fifth place. Smoothy was quick to congratulate Lyons on his “super good run”.

Topping the field for men’s ski competitors was Drew Tabke (USA), with Switzerland’s Jeremie Heitz in second and Julien Lopez of France third.

Archive video of the event action is located on FreerideWorldTour.com. Fans may select to view the entire event or just watch their favourite riders’ runs on the FWT video player. 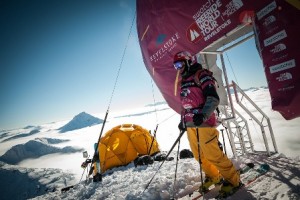