Game on for Cardrona NZ Junior Freeski and Snowboard Nationals

“It’s been a really good season for me,” explained Georgia, “my most successful season yet. It’s my first time competing at Junior Nationals and it was good to try something a bit different.”

In the Salomon Skier-Cross racers first completed a single time trial on the Speed Zone Gravity-cross track. The fastest racers in each age category then moved through to elimination rounds to race head to head, four competitors at a time.

It was a fast and frantic battle to the last with podium getters separated by mere tenths of a second. The Youth boys’ age group saw ski racers, big mountain experts and park skiers all featuring in the mix. Jackson Wells came away in first place, Craig Murray second and Jackson Rich third.

The snowboard slopestyle competition was split across three venues according to age of the competitors. Competitors had only two runs to put down their highest score with judges awarding highest marks for smooth, flowing runs.

Ruggies, Grommets and Ripper girls competed in the Lil’ Bucks Park. The judges were entertained by the efforts of the youngest competitors and commented on some impressive rail riding and rotations particularly amongst the boys. Zedyn Fellows, the only boy competing in the Ruggies age category was noted as one to watch in future years.

The Grommet boys’ group was particularly close to call. Rocco Jamieson attempted an underflip rotation which, if he had only landed would have been earned him a podium finish but a crashed landing put him out of contention.

Valentino Guseli, a past winner of Junior Nationals medals, shone through once again today with a clean first run featuring a front 3 with indy grab, back 3 with tail grab, board slide to switch on the first rail and switch to board slide on the second rail.

Competing in Antler Alley were Ripper and Shredders Boys and Shredders and Youth Girls. Judges were pleased to see some good fluid runs and singled out the Shredder Boys and Girls as the standout performers. Zoi Synott was the top female competitor in this age class with a winning run comprising half cab, back 3, front 3, 50 50, gap to 5 O. Shredder boy Mitchell Davern was awarded top marks for his run of Cab 5, front 5, switch back flip, front lip to 270 out to 50 50 to 180 out.

Youth and Junior boys took on the Big Bucks Park which this year included some daunting rail features at the start including the new wall ride.

Competition was tight in the Youth category with only three points between Tiarn Collins in first and Ronan Thompson in second place. Tiarn was rewarded for good combinations of tricks including frontside and backside spins, and for clean landings.

Carlos Garcia Knight was the clear winner of the Junior category, the third time he has topped the event in snowboard slopestyle. Carlos put down an outstanding second run, demonstrating why he is a contender for the Breakthrough Season and Snowboarder of the Year Awards at this year’s Snow Sports NZ Annual Awards.

He made short work of the wall ride and pulled a 270 off the second rail feature before proceeding to spin his way through the park gaining huge amplitude and landing cleanly.

“I had my ideal run in mind which included a back 10 but I didn’t quite manage that today,” explained Carlos, “but I’m still really stoked to have put down a good run. It was a tough but fun course.”

Judges were also impressed by Liam Whiley who put together a technical run for second place.

Full credit to the Cardrona NZ Park crew who have done a fantastic job with all the courses. 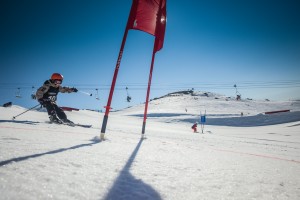