Corey Peters is the Man Who Put the Meteor into Meteoric

Corey Peters is the man who put the meteor into meteoric.  Just two-and-a-half years since his maiden sit-ski experience, the New Plymouth raised athlete is not only on his way to the Sochi 2014 Paralympics, but gunning for a top six spot.   Despite his lack of experience, the Kiwi – who is entered in the slalom, giant slalom, super G and super combined events - has impressed experienced observers with his whole-hearted dedication and natural ability.  It has been some journey.

Sport has played a central role for as long as Corey can remember. Good enough to play age-group cricket and rugby – as a half-back - for Taranaki he also had a passion for surfing and later motocross.  Introduced to the two-wheeled motor sport through his younger brother he quickly started to compete, but it was during an event in Taupo in September 2009 when his life changed forever.  On an unfamiliar course he badly misjudged a jump and the bike struck the ground some 10m beyond the landing slope.  “The suspension on the bike just bottomed out and as I did so my spine compressed and blew out the vertebrae,” explains Corey, who immediately knew the accident was serious.  “I had lost all function from the waist down and I instantly lost my sense of balance. Once the adrenaline wore off after a couple of minutes it felt like someone had cut me in half with an axe.”

Corey was airlifted to Rotorua Hospital and was informed that the vertebrae was badly damaged, crushing the spinal cord by 80 per cent. He underwent surgery to put the spine into place and rods were inserted into the back.   Yet the enormity of the accident only hit home after he was transferred to Burwood Spinal Unit in Christchurch.  It was here the spinal specialist explained to the then active 26-year-old he might not be able to walk again.    “I didn't know much about paralysis, being in a wheelchair and what life was going to be like,” explains Corey on being told the news. “It was very upsetting. I didn't want to believe it.”  Shortly afterwards a long-term relationship ended that “multiplied” the anguish and uncertainly he was feeling. He fell into a rut. Sport was to prove his saviour.

He worked hard on trying to get the function back into his legs. Specialists advised Corey that the first two years were the most likely for nerve recovery. He underwent regular physiotherapy worked hard and the function improved. He found he could move around over short distances on crutches without the aid of leg braces.

He tried his hand at wheelchair tennis and wheelchair basketball, but his life was to change after he was invited to a sports expo in his hometown of New Plymouth 12 months after the accident.  There he met a guy named Ian Rowe who owned a sit-ski. He was intrigued. He later bought one and tried it out for the first time in August 2011. It was a moment which would transform his life.  “I liked the independence of skiing,” explains Corey, who had ridden a snowboard half-a-dozen or so times previously when able-bodied. “I was not restricted in anyway. I also liked that extreme appeal. In that way it was a little bit like motocross. I could fly down a mountain at 80mph reaching some pretty big speeds.”

A passionate surfer pre-accident he found the balance and co-ordination he had honed in that sport was a perfect fit for skiing. Coupled with this, the small amount of function in his legs gave him additional control of his pelvis and hips, essentially tools used to steer the ski. Both combined to equip him with the skills to succeed.  He quickly sought out active competition. He impressed, winning his first competition at the Winter Games at Cardrona in 2011.

After basing himself at Winter Park in Colorado for his first full season in 2012-13 he returned to New Zealand last year and posted a series of impressive results in World Cup events.  He grabbed a gold and a bronze medal in the super-combined and super-G events at Mount Hutt and silver in the slalom at Coronet Peak.   Training alongside New Zealand's Vancouver 2010 Paralympic gold medal-winning skier Adam Hall and sharing the same coach, American, Scott Olsen, the rookie skier's development has progressed at a staggering pace.  Based for part of the year up at the National Sports Center for the Disabled at Winter Park, Colorado, Corey insists that technical gains particularly better “timing” into the turns has contributed to his recent improvement. His overall strength and fitness particularly with core muscles – the principal muscles which power the sit-ski – have also developed.

Yet his mental approach – which he has worked on with the help of High Performance Sport NZ (HPSNZ) mental skills trainer Pete Sanford – has also played its part.  “In my first year competing I was really nervous,” he explains. “I wanted to do well and put a lot of pressure on myself. The skills probably weren't there back then, but now I have them a little more I've learned to cope with the pressure. I'm not fixated on results. I'm just working on trying to do a good clean run. In this way the results will look after themselves.”

This has been born out with his final pre-Sochi World Cup outing in Copper Mountain in the USA in January when the talented Kiwi produced what he believes was the best performance of his career.    In a loaded field, which included the top Japanese racers, (Note, these skiiers did not compete in the World Cup events in New Zealand) he finished second in the giant slalom. It was a massive breakthrough.  “We raced two giant slaloms (that's two runs per race totalling four runs) over the week there (in Copper Mountain) and I ended up winning two of the runs outright,” adds Corey, who finished tenth in the giant slalom at the 2013 World Championships in Spain. “For me, to beat these guys who are viewed as the best in the world was pretty awesome. It gives me huge confidence for Sochi.  “If you look at the times I was racing at the World Championships (twelve months ago) I was quite a way off first place, but now I'm within a second of first place. “Sochi is going to be really exciting. I can't wait to see how it goes and to give of my best.”

So what does Corey – a qualified cabinet maker and boat builder - believe he can achieve in Russia?

“I’ve always said a top ten in each event would be awesome,” says the man whose preferred events are the giant slalom and super-G. “But after the last few World Cup events and the fact my times have improved - a top five or six spot is achievable. If I was to do that it would be pretty awesome, considering I'm a newbie at my first Games.”

For the 30-year-old Taranaki man skiing has offered him the freedom and opportunity he never thought he would ever experience.  “It was really hard for me to adjust for the first couple of years after the accident,” he candidly admits. “I was thinking my life was over and I had nothing to look forward to. Being introduced to skiing helped turn the tables. I now appreciate what I have got and try to enjoy every moment. To see all these places and mountains is not really what I expected. I'll take it. It is an awesome life.”

Piece of Kit – My sit-ski 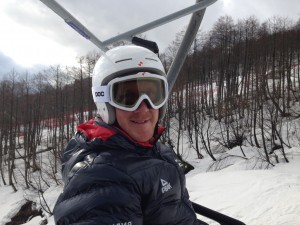