Laax, Switzerland (31 January 2015) – Fresh off the back of an X Games bronze medal last week Cardrona NZ snowboarder Christy Prior (Kaukapakapa) has taken the win at the Burton European Open in Switzerland. Competing against a quality field, Christy took the win ahead of Olympic gold medallist Jamie Anderson (USA) who finished second and Olympic silver medallist Enni Rukajarvi (Fin) who placed third.

Originally planned as a multi-day competition comprising elimination rounds, practice days and then finals, the event organisers found themselves competing against the elements. Heavy snow falls, wind and reduced visibility meant competition had to be delayed for several days before eventually the call was made to cut out elimination rounds and run with straight finals. 16 women would have two runs to post their best score and earn a place on the podium.

Competition day turned out fine and sunny but with fresh snow on the ground lack of speed would be a challenge for the riders along with a limited amount of practice time.

“It was all about making smart use of practice time ahead of the competition and learning to read the course,” explains Christy’s coach Sean Thompson. “Practice went well for Christy and she had a good run put together.”

With start order determined by ranking, Christy was the second to last rider to drop into the course with Jamie Anderson the last. Having saved the best run to last at the previous week’s X Games competition, the Kiwi rider took a whole different approach to today’s run, nailing the top score of 84.00 on her first attempt.

The run started out with a front 5 nose tap on the hitching post first feature before going switch into the cab 180 on the second feature. Christy followed up with a 50-50 and then a front 5 off the whale’s tail feature. Into the first jump with a cab cork 540, into the frontside rodeo 720 and a backside 5 indy grab to finish.

Anderson followed on with a clean, stylish run but it wasn’t enough to knock the Kiwi off the top spot.

“I am super stoked!” said Prior. “It’s my first time here, and I had a great week riding fresh powder, and today with bluebird skies—it’s been awesome.”

“It’s great to see Christy performing well under pressure situations,” says her coach. “She’s riding really well and today rose to the challenge and turned it on when she needed to.” 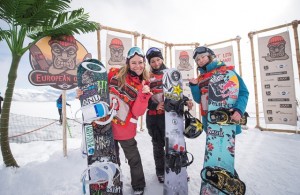