The World Para Snowboard Southern Hemisphere Cup provided the top Para snowboarders with a highly competitive opportunity ahead of tomorrow’s event, while development Para athletes looked to gain valuable points in this event, ensuring they gained a sort after start at Saturday’s World Para Snowboard Cup.

The women were first down the mountain with Qiaorong Pang (China) winning the Women’s SB-UL in a time of 52.40 seconds, while Nicole Roundy (USA) took out the Women’s SB-LL1 in an impressive final run of 42.92.

World Championships bronze medallist Joany Badenhorst (Australia) showed her class as she led the field in all three runs of the Women’s SB-LL2 with a best time of 37.47. Silver and bronze medals were won by Cassie Cava (Great Britain) and Brittani Coury (USA) respectively.

World number one Michael Minor (USA) stamped his mark on the competition in the Men’s SB-UL in the first run with the winning time of 34.67. Close behind was Simon Patmore (Australia) and Minor’s Team USA team mate James Side.

Team USA’s Noah Elliot (USA) made his international debut and held nothing back to win the Men’s SB-LL1 in 35.39 against fellow American Mike Schultz. Bronze went to Daichi Oguri of Japan.

Elliot said, “I just started snowboarding last season. I grew up skate boarding and at 16 years old I got cancer. I decided I wanted to get back into a boarding sport. So I saved up the money, learnt how to walk and moved to Utah to start snowboarding. At the end of my season I went to a national event and it has all moved pretty quickly from there. My goals are to have fun riding and to compete. I was stoked to be asked to come to New Zealand as this my first time out of the States and New Zealand is the best place to go for sure.”

Home town boy Carl Murphy finished off the podium today. Murphy said, “It was tough this morning as conditions were pretty icy. We prepared for it and executed the plan pretty well. I didn’t quite get the result I wanted but we are building for the World Cup so today was more of a training focus than an actual race focus. I’m feeling good going into tomorrow I just need to tidy up a few areas but overall in a good position to take podium.”

Tomorrow will see a strong field of Para snowboarders back at Treble Cone to compete in the World Para Snow Board Cup. This event will be hotly contested with vital points for qualification and selection to the PyeongChang 2018 Paralympic Winter Games on the line. 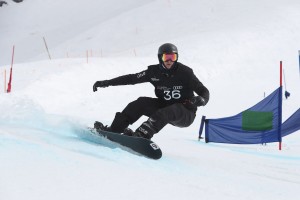